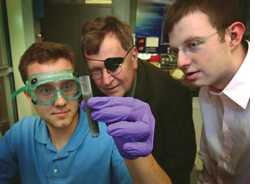 hydrogen can now be conveniently used as fuel without the usual hassle of storage and distribution. Scientists have developed a method to produce hydrogen on the spot for internal combustion engines from an alloy of aluminum and gallium.

The alloy GaAl28 with 28 per cent aluminum by weight, has the potential to replace petrol given its high efficiency and lower cost of production, says lead researcher Jerry Woodall, a professor at the school of electrical and computer engineering of Purdue University, Indiana.

The mechanism is based on a simple chemical reaction. When water is poured on the alloy, hydrogen gas is released. This gas is directly fed into the engine as fuel. The technology produces fuel instantly eliminating the need for transportation and storage.

"Hydrogen generating fuel cells from aluminum have an efficiency of 75 per cent as compared to 25 per cent of petrol-fed internal combustion engines. Therefore, this fuel cell can compete with petrol," says Woodall. Calculations based on prevailing us prices have shown that one kg of hydrogen gas costs around 49 cents (Rs 19) as compared to a litre of petrol, which comes for around us $1 (Rs 40).

Here's how it works. When water is added, aluminium, which has an affinity towards oxygen, breaks it down into oxygen and hydrogen forming aluminum oxide. The end products of the reaction are aluminum oxide (alumina) and gallium along with water as a result of combustion of hydrogen in the engine. No toxic fumes are produced.

Since hydrogen has a low molecular weight, it has to be pressurised or liquefied to provide sufficient driving range. The mass of the tanks needed for compressed hydrogen in conventional engines reduces the fuel economy. In the alloy-fed motors, the chemical reaction is processed in a container, in which the byproducts solid alumina with a liquid gallium core remain along with water. Woodall says recycling this byproduct is the best way to manufacture fresh alloy.

The Purdue Research Foundation's patent application is pending with the us Patent and Trademark Office. An Indiana company has received a licence for the exclusive right to commercialise the process.

The technology is being launched in the us market later this year for small internal combustion engines like portable emergency generators, lawn mowers and chain saws, where they can replace the petrol fuel injector with a hydrogen injector. The researchers are now experimenting with the technology for larger vehicles.