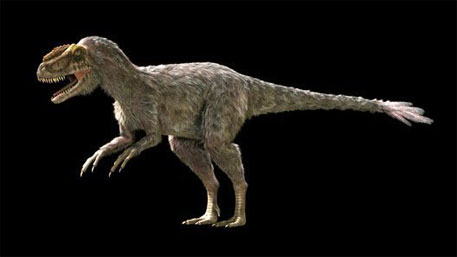 Paleontologists have discovered three tyrannosauroid fossils—one adult and two juveniles—that show dinosaurs had feathers or had the potential to grow feathers, reports BBC.

The new species has been named Yutyrannus huali—a Latin-Mandarin mash-up that means “beautiful feathered tyrant,” in the journal Science. Paleontologists have known about the existence of feathered T. rex dinosaurs, which were called theropods. But most of them were relatively small. Researchers estimate that an adult Yutyrannus huali measured 9 metres long and weighed about 1,400 kg—40 times heavier than the largest previously known feathered dinosaur, reports National Geographic.

The creature’s large size and the primitive state of its feathers rule out the possibility of flight, says Corwin Sullivan, a paleontologist at the Chinese Academy of Sciences in Beijing who was part of the study. Instead, the downy covering may have helped keep Yutyrannus warm, he adds.

Lead researcher Pascal Godefroit of the Royal Belgian Institute of Natural Sciences in Brussels, Belgium, says the find was a big surprise and added that the discovery has “completely changed our vision of dinosaurs”. “Instead of thinking of dinosaurs as dry, scary, scaly creatures a lot of them actually had a fluffy, downy covering like feathers on a chick,” BBC quotes co-researcher Maria McNamara of Cork University in Ireland.

Until now, fossillised evidence of feathery dinosaurs has come from China. The 150-million-year-old fossils of Yutyrannus were discovered in Siberia, reports BBC.

The new discovery, however, does not indicate that all dinosaurs had feathers. “Some will have had feathers as young animals and kept them throughout their lives. Others may have lost feathers as they grew up, and became large enough not to need them, or replaced feathers with scales or relied on bony plates in the skin for protection,” Mike Benton of Bristol University, who was part of the study, told BBC. The key point is that dinosaurs were all initially feathered and warm blooded, confirmation of an idea that has prevailed for years, he adds.