Reptile lived 125 million years ago and is the largest ever 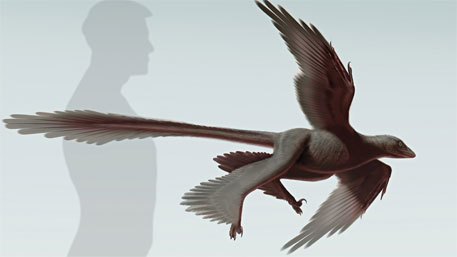 Scientists in China have discovered the fossil of a pre-historic, four-winged dinosaur, which is the largest of its kind. The new species, Changyuraptor yangi, was discovered by a team from Bohai University, China, and the Natural History Museum of Los Angeles County, US.

The 125 million-year-old fossil shows that the dinosaur was covered in feathers and measured 132 cm from its snout to the tip of its tail feathers, which measure up to 30 cm—the longest ever seen on a dinosaur fossil. C. yangi is a new species of microraptorine, a group related to early avians, and is 60 per cent larger than the previous record holder, Microraptor zhaoianus. The newly found ancient creature offers clues to the transition from feathered dinosaurs to birds, write scientists in a research paper published in Nature Communications.

The fossil was discovered in Liaoning province, northeastern China, an area noted for the large number of feathered dinosaur fossils found over the past decade, including the first widely acknowledged feathered dinosaur, Sinosauropteryx prima, in 1996. Before this new find, scientists thought that the small size of microraptors was a key adaptation needed for flight, but the discovery of C. yangi suggests aerial ability was not restricted to smaller animals in this group. They believe the unusual plumage of the reptile helped it to slow down during flight and land safely. By calculating the lift and drag generated by the feathers, they conclude that C. yangi used its long tail to compensate for its large size and maintain control while airborne.

“C. yangi was (like) a big turkey with a really long tail,” says Dr Alan Turner from Stony Brook University, one of the authors of the research paper. “We don’t know for sure if C. yangi was flying or gliding, but we can sort of piece together this bigger model by looking at what its tail could do.”

Scientists believe this to be an important discovery. “I’ve never seen anything like it. It is a stunning specimen and it was stunning to see the size of the feathers. They were one-fourth the size of the animal. It’s just wonderful,” Luis Chiappe of the Natural History Museum of Los Angeles, the lead researcher, told Washington Post.

Scientists are not certain about the food habits of C. yangi, but other microraptorine fossils have been found with the bones of fish and birds in their guts. “We think Changyuraptor may have gone after small prey like birds, lizards, salamanders, fish and mammals, Chiappe told science website, Live Science.