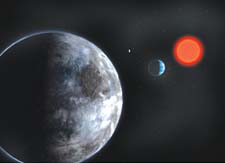 On April 24, 2007, astronomers announced the discovery of a "super-earth". This planet, outside the solar system, is in the "habitable zone" of space where the presence of water is quite likely, making the planet suitable for life, say researchers led by Stphane Udry of the University of Geneva, Switzerland.

The planet has been christened Gliese 581c after the red dwarf star Gliese 581--the 87th closer star-system to the Earth--it orbits. Around 20.5 light years (about 194 trillion km) away from the Earth, Gliese 581c is the first extra-solar planet with a surface temperature similar to the Earth. Researchers believe that Gliese 581c has a rocky mass, covered with oceans, making chances of life here more probable than in Venus or Mars.

But it would be nearly impossible to reach Gliese 581c's denizens. "Reaching Gliese 581c, which is 20.5light years away, is not viable, unless we make rockets faster than the speed of light," says Sandip Chakrabarti of S N Bose National Centre for Basic Sciences, Kolkata. Reaching the moon, which is two light seconds away from us, takes two and a half days on a spacecraft. At this rate, reaching Gliese 581c will take us around 40,000 years.