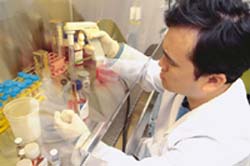 Scientists have recently announced a major breakthrough in stem cell research, which could quell the controversy related to the 'ethical issues' surrounding the cutting-edge medical science.

A new series of stem cells have been discovered in amniotic fluid--the liquid that surrounds a foetus during pregnancy--without destroying human embryonic cells.

The research findings were recently announced by the scientists of Wake Forest University in North Carolina, usa. The study shows, for the first time, that amniotic fluid is a rich source of stem cells, which have the same ability as the embryonic cells to give rise to all major tissue types present in the human body.

Stem cell research is important in the hunt for new treatments for conditions such as Parkinson's disease, Alzheimer's, multiple sclerosis, heart disease and strokes. Blank cells, capable of turning into different types of tissue, act as a repair kit with the potential to regenerate damaged parts of the body. But embryonic stem cells--plucked from an embryo (fertilised egg) in the first days of life--are more versatile.

Stem cell research that uses embryos is mired in controversy, because the embryos from which the cells are harvested, get destroyed in the process. Human life, even in its earliest stages, is being sacrificed in the interest of medical research, its detractors say.

These experiments are considered unethical, and in countries like the us and Germany, government funding to such research is restricted.

However, the new research findings provide scope to collect amniotic stem cells, during a routine medical checkup, without harming the developing foetus.

The scientists also showed that the same cells can be taken from the placenta, which is expelled after delivery. The report by the lead researcher Anthony Atala and colleagues, which appeared in the recent edition of the journal Nature Biotechnology, notes "Our hope is that these cells will provide a valuable resource for tissue repair and for engineered organs as well".