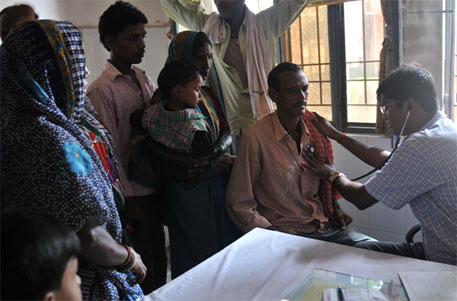 In a significant breakthrough that may strengthen efforts to contain tuberculosis, scientists at a leading research institute in India have identified three genes in TB bacteria which help the bug survive in adverse conditions. If these genes are knocked out, bacteria become more susceptible to getting killed and less able to cause disease.

The research, carried out by the Vaccine and Infectious Disease Research Centre of the Translational Health Science and Technology Institute in Gurgaon, was published in the journal Nature Communications today. It opens up the possibility for the development of new drugs and a more effective vaccine against the disease.

TB is caused by a bacterium called Mycobacterium tuberculosis. The three genes identified in the research are part of the bacterium’s “toxin-anti-toxin system” which plays a role in manifestation of the disease. Scientists found that toxins produced by these three genes during stressful conditions help the bug tide over such conditions by inhibiting its growth and not killing it. Thus, when bacteria are exposed to drugs during treatment, some of these may survive using these toxins. Scientists say these genes may be responsible for recurrence of TB in some patients who appear to have recovered with treatment.

The scientists investigated the functioning of these genes—MazF3, MazF6 and MazF9—in test tube conditions and also, in guinea pigs which provide a good model for studying tuberculosis. Bacterial strains were created in which these three genes were knocked out.

“We found that bacteria in which these three genes had been deleted caused less disease in guinea pigs. In laboratory conditions, these bugs, when exposed to anti-TB drugs, were rapidly killed,” says Ramandeep Singh, lead scientist of the study.

The research may lead to the development of new drugs against TB, especially to strike at the bug when it becomes dormant or drug-tolerant due to the work of these genes. The drugs will have to somehow inactivate these genes. Experts say new drugs are required in view of emerging drug resistance in TB bacteria.

Animal experiments showed that bacterial strains without these genes were less virulent and caused less damage to lungs and spleen in comparison to normal bacteria. These strains may be used to produce a vaccine better than the currently used BCG vaccine or Bacillus Calmette-Guérin. Vaccines are produced using weakened forms of disease-causing organisms.

Sudhanshu Vrati, head of the Vaccine and Infectious Disease Research Centre, says, “Long-term aim of such research is to develop new drug molecules and vaccines. We now have a candidate vaccine and new molecules against tuberculosis may come up. We are looking for more funding to carry out further research.”

TB claims around one and half million lives globally and is a major public health concern in India. An estimated nine million people developed TB in 2013 the world over. Of these, 24 per cent were in India.

Experts say India and other countries may not be able to end TB until scientists develop safe and effective diagnostics, drugs and vaccines. “India and other countries must scale up investment in research and development of new anti-TB drugs and vaccines because existing anti-TB drug therapy takes too long to cure, is too complicated to administer, and can be toxic,” says Bobby Ramakant, an anti-TB activist. Existing TB drugs must also be used rationally.

“Development of new vaccines would have the greatest impact on the fight against TB and its global elimination in the coming decades. The most widely used anti-TB vaccine or BCG helps protect children against TB but its efficacy is very limited in protecting adults,” Ramakant adds.