A molecular theory is being put forward to explain why water behaves the way it does, but proof still eludes the researchers. 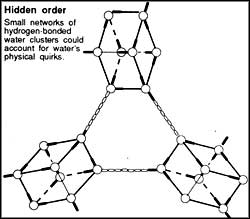 BELIEVE it or not, water that most people take for granted, is the most researched of liquids and scientists are still trying to determine why it is so fluid and why it has the extraordinary capacity of absorbing heat as its temperature rises. The answer probably lies in water's molecular structure, but scientists have yet to unravel the puzzle.

Recently, two US chemists suggested water's properties are due to its elaborate molecular structure. The molecules are shaped in tiny cubes and rings linked by hydrogen bonds that continuously form and break and this gives water its fluidity and high heat capacity. The model evolved by Sidney Benson of the University of Southern California and Eleanor Siebert of Mount Saint Mary's College, both in Los Angeles, consists of octamers and tetramers (made up of eight and four molecules, respectively). Hydrogen bonds -- weak and transient links that can form between electrically-polarised molecules like water -- hold these clusters to one another (Science, Vol 256 No 5065).

Other water scientists, however, are not convinced by the new octamer-tetramer model, deeming it too radical a departure from the prevalent notions of water's microstructure. They agree that water molecules, with their strong tendency to form hydrogen bonds, must develop transient networks of some kind, but they visualise a completely random network of bonds that shift continuously (hydrogen bonds between a single water molecule and its neighbours can break and reform 500 billion times in a second) which allows water to flow as easily as it does.

Benson, however, argues the random network concept cannot explain the high heat capacity of water, because a large increase in entropy (disorder) in the molecular structure is necessary to soak up the extraordinarily large amount of heat that is required to raise water temperature. For such high amounts of heat to be absorbed, an extra measure of order is needed, he said. The hydrogen bond breakage in the model prepared by the two scientists is greater than the entropy in random network models, but the pair conceded they have no further evidence for their hypothesis.

The debate, therefore, is likely to boil for still more time. Researchers using x-ray crystallography have been able to determine the stable hydrogen bond structure of ice, but there is no instrument as yet that can photograph the microstructure of water.