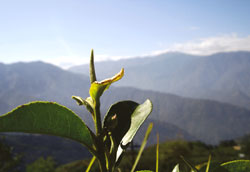 what gives Darjeeling tea its much sought after flavour? A team of scientists is trying to find out just that. Experts at India's Tea Research Association's Tocklai Experimental Station (tes) in Jorhat, Assam, and researchers from Japan's Kyoto University are working to decode the chemistry of the Darjeeling leaf to identify what lends the tea its unique taste and aroma.

"The Darjeeling tea bush is infected with lots of insects which create a biotic stress on the plant which in turn affects its flavour. We are trying to find out how this biotic stress is inducing flavour," says tes director Mridul Hazarika. "Our objective is to try and understand the molecular mechanism of the plant so that we can use it to develop improved tea varieties," he adds.The three Japanese scientists of the six-member team are experts on the molecular mechanism of Oriental Beauty, a popular type of Taiwanese Oolong Tea.

Hazarika said his team may not be able to fully reproduce the Darjeeling flavour, but whatever they find will be beneficial in producing new tea varieties. In fact, in a multi-pronged approach, the scientists have simultaneously begun work to develop a new tea variety as part of their two-year research mission.

"The new tea type will be neither the normal cut leaf type (ctc) or the big-leaf orthodox type," says Hazarika. "We are trying to produce something like a ctc tea with flavour." He said that even if they could make the tea in the laboratory, they wouldn't do so because it wouldn't be cost effective and would harm the tea industry -- both the planters and workers.

Hazarika and his team at the Tocklai station had earlier claimed to have developed the world's first tea pill that could be chewed or sipped and have the same refreshing effect as a steaming cup of tea. The pill will be released in the market after the team gets patent rights for the product. The patent is expected to come through later this year.