Scientists tag Loggerhead sea turtle off the US west coast

Adult turtles have been tagged earlier. Small transmitters have been recently made so that they can be attached to juveniles also 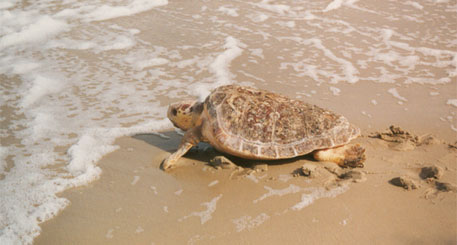 For the first time, US scientists successfully attached a satellite transmitter to a juvenile Loggerhead sea turtle last month.

This was done by the National Oceanic and Atmospheric Administration (NOAA) Fisheries researchers. NOAA Fisheries is responsible for protecting and preserving marine resources.

In a first-of-its-kind, scientists lowered the juvenile turtle in the sea, about 80 km from San Diego, California, after the transmitter was attached.

About Loggerheads
There is little information about the movement of Loggerheads, particularly in their early life stages. These endangered species are hatched in southern Japan’s beaches. Once they enter the water, they are usually not seen again until they return 25-30 years later as reproductive females. Biologists have identified this period as “the lost years”.

US scientists became excited when they spotted small groups of Loggerheads (having 30 cm carapace or shell length) in offshore southern California waters last year around November-December.

“We were excited about the discovery because we had never seen so many of these small turtles prior to that time in southern California waters. Although we know they originated from southern Japan, we were not aware of how they managed to get across the Pacific. We suspect that currents carried them across the ocean,” Scott Benson, a marine ecologist at NOAA Fisheries, told Down To Earth.

How will the transmitter work?
After the Loggerhead was tagged and released in the water, the animal began its journey. It has been beaming back its location ever since, scientists say.

The location data will help scientists answer questions about this trans-boundary species. Loggerheads use the waters of multiple Pacific nations and international high-seas as they cross the Pacific Ocean.

A few other sea turtles also share similar migration patterns. Leatherback sea turtles which originate from the beaches in the western Pacific (New Guinea) migrate across the Pacific regularly as adults. They consume jellyfish off the west coast of North America.

According to Benson, the tagging process required about an hour. The adhesive needed to dry before the turtle was put back in the water.

Some researchers on the US Atlantic coast have developed a technique by which a transmitter is attached to a young turtle with the help of a piece of neoprene (a kind of synthetic rubber). It is then attached to the carapace.

The neoprene will stretch as the turtle grows in size, Benson said.
Unfortunately, Loggerheads sometimes get caught accidentally in the fishing nets used to catch swordfish in southern California waters.

“We need to know more about the movement pattern of these Loggerheads so that we can inform fishers how to avoid catching them. We’re also interested in the larger science questions about Loggerheads’ movements across the Pacific during the juvenile stage,” Benson added.

Following the turtle
To protect turtles, NOAA Fisheries has created the Pacific Loggerhead Conservation Area off the coast of Southern California.

“Sea turtles play a vital role in maintaining the health of the world's oceans. These roles include maintaining productive coral reef ecosystems, transporting nutrients from the oceans to beaches and coastal dunes and providing predatory pressure on jellyfish population,” Benson said.

After being taken out of the ocean, the juvenile turtle was brought to the Aquarium of the Pacific, a public aquarium in California, where it was fed and monitored. However, veterinarians later decided that the turtle was healthy and could be released in the water again.

According to the scientists, the tag should stay on the turtle for four to five months. As long as the tag is attached, people can follow its travels on a map, which is updated several times a day.

The turtle has travelled more than 200 km so far, though it’s still unclear whether it is actively swimming or just drifting about. Scientists hope to find an answer as more data come in.