Scientists trace the origin of black diamonds to space 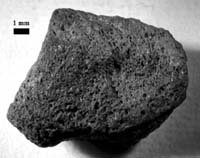 the heavens showered us with diamonds. Only, they were black--and of course, rarer than conventional diamonds. Scientists have traced the origin of black diamonds, also called carbonado diamonds to space. They have found a striking similarity in the hydrogen content of these diamonds with diamonds from meteorites reported in 1888 and interstellar dust. This indicates that all the diamonds were formed in hydrogen-rich environments in space.

Stephen Haggerty of Florida International University explains "Trace elements critical to an extraterrestrial origin are nitrogen and hydrogen. The gases are present interstitially in the diamond structure and at the inter-phases between the micro-diamonds that make up the aggregates that constitute carbonado."

Besides, similarity of the carbon isotopes present in the black diamonds with that of meteoritic diamonds, its high porosity, high concentrations of polyaromatic hydrocarbons (pahs) and chemicals such as titanium nitride suggest their origin in space, says a paper published online on December 20 in the Astrophysical Journal Letters. pahs are known to form in space due to collisions between dust grains consisting of graphite and/or silicates and from reactions between smaller unsaturated hydrocarbon molecules and radicals in the remnants of carbon-rich stars. According to Haggerty, carbonado diamonds were once the size of asteroids, a kilometre or more in diameter when they first landed on Earth.