Scientists under a microscope 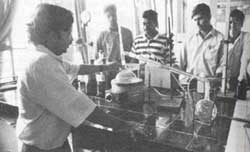 A REPORT sponsored by the department of science and technology (DST), called Profile and Productivity of Academic Science in India, gives policymakers a clear window into research by the scientific community.

The report, which was finalised in late March and had been stretched out over 3 years, covered 1,075 academics from 20 prestigious and peripheral institutions classified into clusters according to their research capacity or potential. The uniqueness of the report lay in its methodology, where analyses was based on the "scienometric profile" of the institutions.

"Broadly speaking, a scienometric profile is the outline of the research works carried out by academics, like publications, conference presentations and patents, and algorithms. This data was collected from the science citation index, which is prepared by the Institute for Scientific Information," said P S Nagpaul of the National Institute of Science, Technology and Development Studies, who compiled the report for the DST.

The science citation index records research works from 4,000 science journals worldwide, including 28 journals from India. This data represents the more important or valuable segment of the scientific literature published. Journals are classified into subfields, subfields into fields, and each article is classified into the field/subfield of the journal in which it is published.

"The publication counts are a reasonable measure of the quantitative dimension of research performance. The quality is judged from the number of times the publication is referred to by other researchers, as is the prestige of the journal," says Prabal Sikka of the DST. The quality (or "impact factor") is measured on a range of 0-10; a poor quality article is allotted upto 2 points; an excellent quality article gets between 8-10 points.

The reasons for this limping track record, which had been covered using organisational profiles based on sample surveys in the particular institutions, were excessive teaching load and administrative duties, lack of specialised equipment and technical support personnel, and the virtual absence of computing facilities and access to computerised databases; and, significantly, a lack of motivation.

Heads of departments sought a decrease in teaching load, an increase in time devoted to research, and a drastic reduction in time spent on routine administration, which could be achieved through simplification of administrative rules and procedures, and augmentation of secretarial and administrative support services.

"Administrative duties vary at different levels, and even from institute to institute. Senior professors have more responsibilty, and administrative duties tend to be more at residential institutes. It is true that excessive duties come in the way of pure academics," says A K Gupta, dean (students), IIT Delhi.

Regarding the research funding pattern, the report reveals a low contribution from industry. While the better known institutions had received at least Rs 1 crore from the Central government funding agencies during the 7th 5-year plan (the government's contribution towards research, for all the institutions taken into consideration for the study, was 31 per cent), the industry's contribution is a paltry 2 per cent.

The report finds that the academic community feels that it is not the mission of the researcher to collaborate with industry. They find that corporate-based research provides fewer challenges to the academic researcher, because industry would only be interested in promoting self-serving research.

On the other hand, the report notes that academia needs to change its attitude towards industry when it comes to involvement in technology transfers and consultations, and in developing a reciprocal and symmetrical linkage.