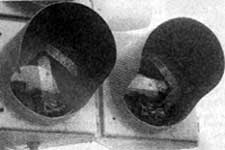 LASER sensors, induction coils set into the macadam, a fast mainframe computer and state-of-the-art traffic control software: that is the kind of hi-tech the Delhi Police are trying to import to smoothen out the Capital's chaotic traffic. The system will reduce fuel consumption, pollution and the number of accidents. And, at the end of the day, possibly make for less domestic violence from harassed commuters.

A Rs 15 crore proposal for one of two foreign software packages -- called SCOOT and SCATS -- has been submitted to the government, but is yet to be cleared. In the meantime, the police have identified 68 stretches of road on which SCOOT can be used. This year, they have begun to use a simpler programme called TRANSYT 9 on three of these stretches -- parts of Shankar Road, Aurobindo Marg and Ring Road.

Police are manually counting the number of cars passing through major intersections. This data is processed by TRANSYT 9, which comes up with optimum timings for traffic lights and triggers them in sequence. Result: you may have to stop at one traffic signal, but thereafter it's green all the way, so long as you keep within speed limits.

Later, the police hope to use the smarter SCOOT or SCATS systems on the same routes. These update their database automatically through laser and other sensors which count the number of vehicles passing through. That enables SCOOT, the system which the police are favouring, to react to changes in traffic flow patterns every 2.5 minutes. Unlike TRANSYT 9, SCOOT can also link up routes in a network. The motorist then gets synchronised green lights even after a turn.

The number of vehicles in Delhi has increased four times faster than its population in the last 18 years. By the turn of the century, the city will have five million vehicles on its roads. Vehicular pollution already accounts for 70 per cent of carbon monoxide emissions and 30 per cent of suspended particulate matter in the city.

Some traffic management experts are sceptical about the 'green channel' systems. "They'll never be as effective here as in the West because Delhi is laid out in a circular pattern, unlike their linear cities," says D Sanyal, former executive director of the National Transport Planning and Research Centre (NATPAC).

The real problem, Sanyal adds, is Delhi's poor traffic discipline. "Green channel systems need absolute adherence to laws, because one pushcart -- or a cow -- in a fast lane can throw the whole system out of gear." In other words, unless the people and police change their attitude, traffic conditions are unlikely to improve, SCOOT, SCATS or any other vigorously-titled software notwithstanding.