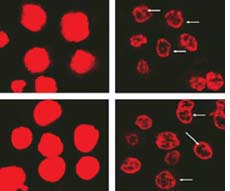 venom spewed by the deadly Indian black scorpion (Heterometrus bengalensis) could have a possible cure for human blood cancer, a new research claims.

A joint team from Indian Institute of Chemical Biology, Kolkata, and University of Calcutta found in laboratory tests that venom from the black scorpion stopped the proliferation of cultured human blood cancer cells and drove them to commit mass suicide (apoptosis or programmed cell death).

"This is the first report of anti-cancer potential of Indian black scorpion venom from India," says Aparna Gomes, who led the research. "We have already identified that the anti-cancer effects of scorpion venom are due to the presence of certain proteins," says Antony Gomes, co-author of the study to be published in a forthcoming issue of Leukemia Research.

The researchers are working to decipher the identity of the anti-cancer proteins in scorpion venom and find how those proteins inhibit the growth of cancer cells. This provides clues to the development of a new anti-cancer drug.

The researchers cultured two types of human leukaemic cell lines (u937 and k562) and exposed them to doses of scorpion venom for 48 hours. The team took two million of each type of leukaemic cells. The u937 cells were exposed to 0.0000415 gram/ml of scorpion venom and k562 cells to 0.0000883 gram/ml. A batch of unexposed leukaemic cells was treated as controls. The study found that both the doses of venom halted the growth of 50 per cent of the cancer cells. Sophisticated imaging techniques revealed that the venom-treated cancer cells underwent controlled death.

The control cancer cells showed intact cell membrane, but the treated cells clearly showed deep ridges and furrows as well as severe membrane bulging, the hallmark of mass death. The treated cells had damaged nuclei as well as fragmented dna compared to intact ones of controls. The venom also arrested the cell cycle reducing the dna content of the cancer cells.

Such study results are encouraging. "Of the 90 species of venomous Indian scorpions, we have seen only one species," says Antony Gomes.He believes that more effective anti-cancer drugs can be made by studying venoms.

A cheap anti-leukaemic drug is urgently needed as the National Cancer Registry has identified leukemia among ten of the leading cancers in Delhi, Aurangabad, Barshi, Bangalore, Nagpur and Thiruvananthapuram.