Screen out the liar 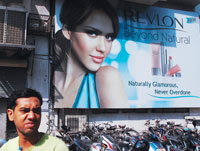 IT IS difficult to escape advertisements. They are everywhere, on billboards, in mass media and on the Internet.

Those who find virtue in the notion that anyone with money can promote a product to consumers and increase growth rates form the cheering brigade for ads. Then there are those who despise advertisements’ attack on our senses, their appropriation of language for use in a misty world located somewhere between truth and falsehood, and their relentless, shameless exploitation of cultural icons and values to sell goods and services.

Advertisers don’t just construct fantasies, they hone in the consumer’s aspirations to hook them to brands. Today’s advertisers take too seriously the nearly century-old statement by novelist H G Wells that advertisement is legalised lying. But it is difficult to distinguish between apparently harmless exaggeration and harmful misinformation.

It is easier for companies to woo parents by targeting children. The World Health Assembly—WHO’s decision- making body—in May passed a resolution on how to market food and non-alcoholic beverages to children. It stressed that television commercials were influencing children’s preferences, purchase and consumption of foods.

This point has been emphasised before. Media experts have for long maintained that parents have a tendency to follow ads that promise to make their children sharper, stronger and taller. There are television commercials of baby oils that show an infant growing faster and walking sooner after being massaged regularly with the oil. Then there are ads that claim an iron-rich cereal or a calcium-rich biscuit can work wonders for a child’s intelligence.

There is a section of public commentators, which says globally, health claims made in ads for children’s food products are closely watched. Recently, in the US, Nestle was forced to drop its claim that one of its products improves children’s immunity. Six weeks ago, the commission had asked Kellogg to stop claiming that the nutrients added to its Rice Krispies cereal helped bolster children’s immunity. In 2009, the US government had taken Kellogg to task for claiming that its Frosted Mini-Wheats improved children’s attention span.

The Advertising Council of India also claims there are guidelines against products with untested claims. Critics, however, say there are ways for advertisers to get around the untested claims clause. Food companies are known to fund studies that vindicate their claims; many have scientists on their payrolls. But democracy often provides ways to spot even the most deceptive ad campaign. The multinational Heinz is in the dock in India for bankrolling studies to prove its health drink Complan makes children taller (see: Complan’s tall claim falls short). What is significant here is that a reluctant Maharashtra Food and Drug Agency was spurred on to take action by the state’s high court, which in turn was prompted by a Right to Information petition.

The petitioner, septuagenarian pediatrician R K Anand, has a history of being a gadfly for multinationals. In the late 1970s he took on corporate might by suggesting that branded milk products could transform infants into a “bonnie, bonnie baby”. Anand, along with like-minded doctors, forced the Centre to formulate the Infant Milk Substitute Act to ban use of babies’ photographs on tins and packs that could lure mothers to buy the products.

This time around the doctor was aided by the RTI Act. Anand resorted to RTI after Maharashtra’s Food and Drug Agency dilly-dallied on his query about the Complan ad.

Some more prodding by the public could put an end to such advertising scams. The government needs to get its act together. When was the last time it imposed a hefty fine on a company for making a false claim?