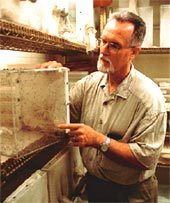 It would seem as if long-sleeved apparel were back in vogue in the us. But protection, not fashion, has forced people to cover themselves up. For, the West Nile virus has reared its head again in the country -- and this time with a vengeance. It has already claimed 16 lives across the us. And it is estimated that 371 others have been infected. Several states have unconfirmed cases not yet reported to the Centres for Disease Control and Prevention (cdc). The cdc has officially reported one case each in Alabama, Washington and Illinois, 71 in Louisiana, 28 in Mississippi and 12 in Texas.

Louisiana has even decided to use synthetic pyrethroids to control mosquitoes. While authorities say the pesticide is safe, a few studies have shown that it can disturb the hormonal balance in the body and cause neurological disorders in animals. "We are opposed to the widespread spraying of pesticides and have been actively fighting against this," says Mitchel Cohen of 'No Spray Coalition', a New York-based non-governmental organisation. The Maine Environmental Policy Institute warns that the authorities should rein in pesticide applicators, who are cashing in on the misconceptions of the people about the virus. Instead of chemicals, the focus should be on safe alternatives such as mosquito nets and use of fish that kill larvae. Experts attribute the quick spread of the virus to an unusually warm and dry summer.