In MP's stance on river linking 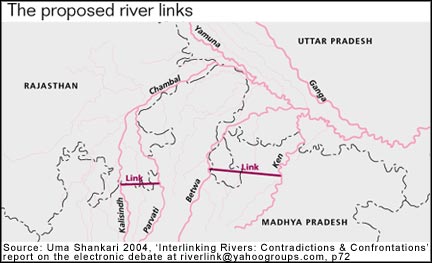 with political power changing hands in Madhya Pradesh (MP), there has been a concomitant shift in the state's stand on the issue of river networking. The new Bharatiya Janata Party (bjp) government has "agreed in principle" to connect Parvati, Kalisindh and Chambal rivers. The decision, taken in the second week of February, overturns the previous dispensation's rejection of the plan. The other state involved in the project is bjp-ruled Rajasthan. It has already given its green light to the venture. The entire scheme is a part of the Rs 5.6-lakh-crore nationwide river-linking programme.

But experts are apprehensive about mp's new-found acceptance of the project. Just a couple of months ago, the then Congress government of mp had argued that the Kalisindh-Chambal link was not economically viable on account of its adverse cost-benefit ratio and internal rate of return. But the new government voiced no such concerns. "We have already given our consent for the Kalisindh-Chambal and Ken-Betwa links (the latter involves Uttar Pradesh). The next step will be taken only after the Centre completes its detailed survey," reveals A K Sujatia, engineer-in-chief, state department of water resources.

Sudhirendar Sharma of Delhi-based non-governmental organisation Ecological Foundation, is sceptical. " mp's reversal of position on the mega project is tied to political changes rather than environmental or social assessments. Since mp and Rajasthan are ruled by the same party that leads the Union government, these have become convenient locations," alleges Sharma.

Meanwhile, Uttar Pradesh has not yet agreed to the Ken-Betwa project. Environmentalists have criticised the link. A review of the project by Himanshu Thakkar and Bipin Chandra of South Asia Network on Dams, Rivers and People challenges the very basis of assuming Ken as a surplus and Betwa as a deficit basin. It alleges that this has been done merely to justify the scheme. The water is to be transferred from Ken to Betwa through a 212.4-kilometre-long canal. The study also points out that the tracts to be submerged by just one of the dams will include 3750 hectares (ha) of forestland and 2510 ha of cultivable land. Further, thousands of ha of cultivable land would be acquired for link canals in Chhatarpur and Tikamgarh districts of mp.