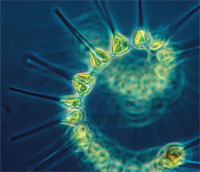 CLIMATE change and the resultant rise in ocean temperatures is likely to upset natural cycles of processing carbon dioxide (CO2), nitrogen and phosphorous in planktons (microscopic aquatic plants), suggests a study published in Nature Climate Change. Planktons remove nearly half of the atmosphere’s CO2 during photosynthesis and store it under the sea.

Using phytoplanktons, researchers from the University of East Anglia (UEA) showed that rising ocean temperatures will adversely impact planktons and this would, in turn, intensifyÃ”Ã‡Ãªclimate change.

The researchers found that although protein synthesis inside planktons increased, the number of ribosomes—the protein builders—and associated rRNAs (ribosomal ribonucleic acid) decreased. Ribosomes are rich in phosphate and a decrease in their number would lead to higher nitrogen/phosphate ratios in the organisms. This change will result in lower productivity, affectingÃ”Ã‡Ãªthe marine carbon cycle.

The study was done using a computer model that took into account temperatures of oceans, 1.5 million plankton cDNA sequences (complementary deoxyribonucleic acid) taken from samples and biochemical data. With rise in temperatures, the presence of nitrogen in oceans might decrease, says Thomas Mock, from school of environmental sciences at UEA and the lead researcher of the study. The team now wants to get more information on how temperature controls resource allocation in algae by quantifying as many resources as possible and also by looking at differences between species and strains.

“Only when we properly understand how the environment selects for specific traits, will we be able to make reliable predictions as to how climate change will change biodiversity in the oceans,” says Mock.

The impact of temperature on marine phytoplankton resource allocation and metabolism