In just 50 years, the Aral Sea - once the fourth largest inland water body - has turned into world's newest desert 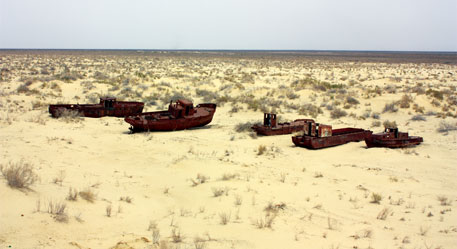 It should serve as an eye-opener for world leaders and institutions that favour economic growth at the cost of the environment. In October last year, the world saw the death of the Aral Sea—a lake that was so big that it was called a sea. 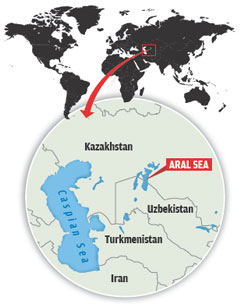 In 1960, the Aral Sea was the world’s fourth largest inland water body, spread over 67,499 sq km—an area 65 times that of Delhi. Its basin was spread over seven Central Asia nations—Uzbekistan, Turkmenistan, Kazakhstan, Tajikistan, Kyrgyzstan, Afghanistan and Iran. Today, hardly 50 years later, it is a shadow of its former self. According to UK-based online environment paper Earth Times, 82 per cent of the sea has dried up into a desert, Aralkum.

“The tragedy of the Aral Sea is among the biggest ecological disasters of modern times, indeed of human history itself. It is a crime against nature. A man-made tragedy,” says Istanbul filmmaker Ensar Altay, who in 2013 made a documentary on the sea called People of the Lake, highlighting the plight of the sea and those who once lived on its shores.

The Aral Sea is an endorheic lake, which means that although it has surface inflow, there is no surface outflow of water. The inflow into the sea is because of two rivers, the Amu Darya and Syr Darya.

The sea started to shrink because of the ambitious economic plans of Soviet leader Joseph Stalin. In 1929, he ordered collectivisation of farms in Central Asia to achieve cotton independence. The lasting legacy of this social and economic transformation was destruction of traditional irrigation in the Aral Sea basin. In the 1940s, under Stalin’s Great Plan for the Transformation of Nature, construction of irrigation canals was started on a large scale. Many of the canals were poorly built, allowing water to leak or evaporate.

“In the first six decades of the 20th Century, the Aral Sea’s water balance was stable,” says Philip Micklin, professor of geography, Emeritus, Western Michigan University, and an expert on the sea. “The deltas of the Syr and Amu rivers sustained diversity of flora and fauna, including endangered species. They also had considerable economic importance as they supported irrigated agriculture and animal husbandry,” he adds.

But by 1960, between 20 and 60 cubic kilometres of water was going each year to the land instead of sea. Most of the sea’s water supply had been diverted, and in the 1960s, it began to shrink.

In 1987, the sea separated into two water bodies—a small Aral Sea in the north and a large Aral Sea in the south. The Syr flows into the former, the Amu into the latter. In 1992, the local authorities constructed an earthen dike to block outflow to raise the level of the small sea. In August 2005, the dike was replaced by a dam (Kok-Aral) built by Kazakhstan. In the case of the small sea, the dike and dam raised and stabilised the water level, leading to greatly improved ecological conditions. But the large Aral Sea was not so fortunate. It continued to dry up and by the early 2000s had divided into a shallow eastern lobe and a deep western lobe connected by a channel.

In October 2014, the eastern lobe dried up completely for the first time in modern times, according to NASA. The seabed that emerged is now known as the Aralkum desert (see `Dry and barren').

While experts hold the former Soviet Union’s economic policies responsible for the shrinking of the sea, they also blame the area’s geopolitics for the death of the water body.

The say the seven nations never really tried to save the sea. The Aral Sea is located in a place which is still Russia’s backyard and where Russian influence reigns and competes with forces of Islamic extremism and Sinic and Western influence.

“The Soviet central government, by expanding irrigation in the basin beyond the point of environmental sustainability, dried up the sea. Central Asian Republic governments supported this enthusiastically,” says Micklin. He adds that post-Soviet governments, including that of Uzbekistan where Islam Karimov is President, continue to support irrigation as one of the key foundations of their economies.

In fact, 2014 saw a string of events in the region’s vicinity—Russian annexation of Crimea, unrest in Ukraine, soured Russian-West relations, global jihad and the continued rise of China.

“All these events indirectly influence the future of the sea. Local governments in the catchment area have a lot of other things to do now. Saving the Aral Sea is not the primary task for them,” says Nikolay Vasilevich Aladin from Zoological Institute of the Russian Academy of Sciences, St Petersburg.

The Aral Sea’s disappearance has led to severe negative ecological, economic and human welfare consequences, affecting not only the sea but a zone around the water body of several hundred thousand square kilometres holding a population of several million. The vibrant commercial fishing industry that developed in the first half of the 20th Century ended in the early 1980s as indigenous catch species disappeared owing to rising salinity and loss of shallow spawning and feeding areas.

Navigation on the sea also ceased by the 1980s as efforts to keep the increasingly long channels open to the ports of Aralsk at the northern end in Kazakhstan and Muynak at the southern end in Karakalpakstan became too difficult and costly.

Micklin says there has been continual desertification in the area. Salt has accumulated on the surface forming pans where practically nothing will grow.

Salt-tolerant plants and drought-tolerant plants have replaced endemic vegetation. Strong winds, particularly in spring, blow salt and dust from the dried bottom of the sea on to surrounding land.

Owing to the sea’s shrinkage, climate has changed in a band up to 100 km wide along the former shoreline in Kazakhstan and Uzbekistan, Micklin says.

As a result, maritime conditions have been replaced by desert-like regimes. Summers have warmed and winters cooled, spring frosts are later and fall frosts earlier, humidity is lower, and the growing season shorter, he adds.

The population around the sea suffers health problems. Bacterial contamination of drinking water is pervasive and has led to high rates of typhoid, viral hepatitis and dysentery. Tuberculosis is prevalent as is anaemia, particularly in pregnant woman. Liver and kidney ailments are endemic.

So what do the coming years hold in store for the Aral Sea? Four months after the eastern lobe of the Aral Sea dried up, the Uzbekistan government has finally announced a US $2 billion package to revive the water body. The project will be funded through international loans that will be repaid by the Uzbek government and International Fund for Salvation of the Aral Sea, which includes Kazakhstan, Kyrgyzstan, Tajikistan, Turkmenistan and Uzbekistan.

And will this be enough? Micklin, Aladin and Altay agree that the Kok-Aral Dam built by the Kazakh government in the 1990s was the best thing to have happened to the Aral Sea. “The dam has worked better than expected,” says Micklin. Altay adds: “I don’t think it is sufficient. The northern Aral Sea needs to be supported both naturally and economically. Fish species need to be increased and water quality should be under control. But it is costly. I am not sure if the Kazakh government can afford it.”

The billion dollar question remains: Will we be able to see the Aral Sea back in its former glory in our lifetime?

“Doubtful. To accomplish that would require not only major and expensive rebuilding of irrigation networks, but also major cutback of irrigation, which will have harmful economic impact,” says Micklin. According to Aladin: “In the near future, we will only be able to save some parts of the sea.”

As for Altay, he ends on a philosophical note: “We should keep our hope alive. This is the only thing we have.”