A foam spray can be used to seal the hazardous debris at Chernobyl, Ukraine, and also to safely transport radioactive wastes 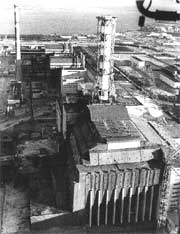 innumerable cracks and holes that have appeared on the sarcophagus, that is meant to stop radioactivity leaking from the damaged nuclear reactor at Chernobyl in Ukraine, can now be plugged. Eurotech, a company based in La Jolla, California, has been given the green signal by the Ukranian government to start testing a new foam spray at Chernobyl in spring.

The company says that 35,000 cubic metres of grey foam, made from silicon, that is resistant to the effects of radiation, could be used to fill the sarcophagus and seal the hundreds of tonnes of hazardous radioactive debris inside.

Called ekor, the foam was developed by the Russian government's Kurchatov Institute in Moscow with financial backing from Eurotech. According to Randolph Graves of Eurotech, two types of foam could be used at Chernobyl: one that is sticky and another that hardens. Both are based on siloxane, but their other key ingredients are secret. Graves says that the foam does not burn and can resist radiation damage for as long as 200 years.

The foam is intended to contain radioactive waste at the site for at least the next eight years until a new concrete and steel containment vessel is constructed around the deteriorating sarcophagus. Michael Hayns, a former safety specialist with the uk Atomic Energy Authority, now at Aston University in Birmingham, points out that dust would also escape if the 20m wide reactor lid, now lodged vertically in the remains of the reactor, were to collapse. The foam should prevent these dust clouds from forming. "As a temporary measure, the foam seems a pretty good thing to do," Hayns says. Graves puts the cost of filling the sarcophagus with foam at us $200 million, two-thirds of the preliminary budget for the cleanup of Chernobyl promised to Ukraine by the g7 group of industrialised countries.

"It is a remarkable material for nuclear emergencies like Chernobyl," says Graves. He claims that the foam can also be used to help transport from and store radioactive waste at the 400 nuclear facilities around the world that are due to be decommissioned before 2020.