Current heat wave is not just an aberration, feel experts 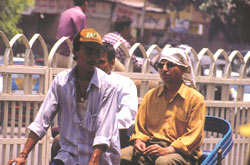 a severe heat wave swept across the southern, central and northern parts of India in May. More than 1,100 people are said to have succumbed to the scorcher. In Andhra Pradesh, the unusually intense and prolonged heat claimed more than 1,000 lives. This prompted state chief minister Chandrababu Naidu to constitute a scientific committee to look into the occurrence and explore its links with global warming.

A heat wave is experienced when the local temperature is four to six degrees celsius above normal. According to Murari Lal of the Centre for Atmospheric Studies at the Indian Institute of Technology (iit), New Delhi, "These extreme weather conditions are signs of global warming and will become more frequent." He adds that in 2002 the mercury has risen sharply. If experts like Lal are to be believed, the consequences of climate change phenomena are many and alarming, particularly for India.

H R Hatwar, director of Indian Meteorological Department (imd), Northern Hemisphere Exchange Centre, differs. "The temperature in Vijayawada (48 degree celsius) is unusual. Though hot winds from the drier west (Rajasthan) move towards the east coast via central India every year, a prolonged flow is uncommon. However, there is no trend that signals a link with global warming," he avers.

In 2001, an assessment of scientific studies of climate change by the Intergovernmental Panel on Climate Change (ipcc) had predicted that human activities will continue to change the composition of atmosphere throughout the 21st century (see: Down To Earth, Vol 9, No 19, February 28, 2001).

Another trend emerging against the backdrop of the heat wave is the major shift in the monsoon rainfall pattern from 1991 to 1998. In most of the north-eastern states rainfall is 17 per cent below normal, while in eastern Madhya Pradesh it has declined by 12 per cent. A similar pattern prevails in Punjab, Haryana, Chandigarh and Delhi.

By 2050, Lal predicts a sharp decline in the amount of winter rainfall which can lead to a severe drought.