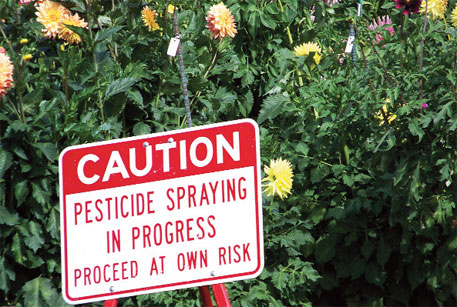 CHLORINE in tap water and pesticides in food are making people prone to food allergies. A US study has found that dichlorophenol, a chlorine-containing chemical, can trigger allergies to food items, ranging from milk to cucumber. Published in December in Annals of Allergy, Asthma and Immunology, the study identifies chlorinated drinking water and pesticide-treated fruits and vegetables as the main sources of this chemical. People can also get exposed to it through mothballs and cleaning material in urinals.

Globally, nearly 500 million people are allergic to one food item or the other. Allergies happen when a person’s immune system is hyperactive and reacts adversely even to a normally harmless substance. “Previous studies have shown both food allergens and environmental pollution are increasing in the US,” says lead author Elina Jerschow of Albert Einstein College of Medicine in New York. “Our study suggests the trends might be linked, and that increased use of pesticides and other chemicals is associated with higher prevalence of food allergies.”

Jerschow and her colleagues included 2,211 participants from 2005-2006 US National Health and Nutrition Examination Survey in their study. Of these, 411 were allergic to specific foods like shrimps or peanuts and 1,016 to environmental contaminants like cat and dog hair. The participants were made to fill a questionnaire about their pesticide exposure in seven days prior to the study and their urine was tested for dichlorophenol.

The researchers found that in the urine of participants with allergies, the level of the breakdown products of two dichlorophenol-based pesticides were as high as 2.9 mg/l and 53.7 mg/l. According to the US Environmental Protection Agency, permissible limits of these pesticides, 2,4-dichlorophenoxyacetic acid and 1,4-dichlorobenzene, in drinking water is 0.07 mg/l and 0.075 mg/l respectively.

Those participants also had very high levels of Immunoglobulin E (IgE) in their blood. These are antibodies found in mammals to fight infections and allergies. People with allergies typically have IgE levels of 0.35 kilo units per litre or higher.

Previous studies have linked occupational exposure to pesticides with allergies. Jane Hoppin of the National Institute of Environmental Health Sciences, North Carolina, US, published an article in 2009 that showed farmers who use pesticides in their fields are at a high risk of asthma, including allergic asthma. Much earlier in 1998, Wilmun Dong had found that when rats are exposed to an insecticide, carbaryl, they become prone to allergies.

Jerschow’s study suggests that allergies can stem not only from occupational exposure to pesticides but also through consumption of food products that contain such chemicals. While the study cites chlorinated tap water as a primary source of dichlorophenol, Jerschow clarifies that one cannot completely rely on bottled water either since various studies have found pesticides in that as well. Using alternative methods of water treatment like ozone and UV light might be the best way to avoid allergies.

“I agree with the findings. It surprises me that pesticides are used to treat water. Temephos, which is used to prevent mosquito breeding, has deleterious effects on humans. While the concentration in which it is used is low, its use is still not justified,” says Om Rupela, former principal scientist at the International Crop Research Institute of Semi-Arid Tropics in Patancheru, Andhra Pradesh.

At present, however, the link between pesticides and allergies remains associational and “prospective studies on evaluation of the causal relationship would be required,” notes Jerschow. Hoppin says future studies should also focus on pesticide exposure before people developed the allergic tendencies.