A new lens for radars to bring in more efficient communication 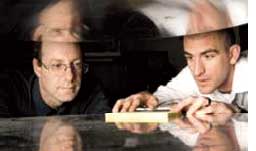 Unlike  the spectacle lenses that control visible light, instruments like radars control radio waves or microwaves which are a much bigger part of the electromagnetic spectrum. A simple glass or plastic lens cannot do this as they are too large and heavy. Instead, materials engineered to collect the electromagnetic rays efficiently are used. These are called metamaterials and their properties depend on how the lens is structured.

Researchers at the Duke University have created a new lens to improve the function of radars so that they have a much wider field of view and produce clearer images.

More than 1,000 individual pieces of fibreglass have been put together to make the prototype of this lens which is merely four inches by five inches in size and less than an inch in thickness. The pieces are arranged in parallel rows giving the lens an appearance of miniature Venetian blinds. This is the first demonstration of what was theoretically possible. The findings were released on December 20 in Nature Materials. The new lens has a view of 180 degrees and can image light from an entire hemisphere onto a flat surface. If a camera chip is attached to its flat surface, the lens can image and transmit the entire hemisphere in a single shot. The prototype lens has been designed to work with microwaves that are used in ship navigation, air traffic control.

“While these experiments were conducted in two dimensions, the design should provide a good initial step in developing a three-dimensional lens,” said David R Smith of department of electrical and computer engineering at Duke University who led the study. “The properties of the metamaterials we used should also make it possible to use infrared and optical frequencies.”