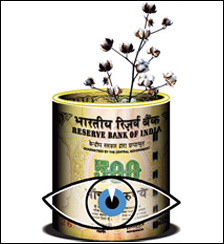 THE Union agriculture ministry will redraft the seed bill following complaints by MPs, states and farmer groups. Their main grouse is that the bill, which aims to regulate the quality of seeds, does not monitor their prices, crucial for farmers.

The Seed Bill 2010 was approved by the Cabinet in March and was to be tabled in the Rajya Sabha in mid-April. Sources in the ministry said MPs and state government have suggested over 100 amendments.


At present, most states do not control the prices of seeds sold by hybrid seed companies. The companies fix their own prices. They often exploit farmers, said D Narasimha Reddy, chief adviser with Chetana Society of farmers and activists in Andhra Pradesh. “It has been six years (since the 2004 draft) and the Centre has failed to include a clause related to seed price, which should be the essence of the bill,” he said.

Seed producers oppose this. The National Seed Association of India, a group of over 200 seed producers, said price controls—by Maharashtra, Gujarat and Andhra Pradesh, for example—are making hybrid seed business unsustainable. According to the association, the seed industry has invested more than Rs 6,000 crore in research and infrastructure over the past 20 years. Research and development involved in developing hybrids along with the challenges of weather makes it a high-risk business—the chance of developing a product that is successful in the market is less than 50 per cent, it said.


The seed bill proposes setting up a national committee to compensate farmers in case seeds fail to perform as promised. Farmer groups argue that a national compensation committee is too distant and expensive for small farmers. How can small farmers access it when their grievances are not properly addressed at the state level, asked M Kodand Reddy, chairperson of the Andhra Pradesh Kisan and Mazdoor Congress. He suggested a district-level committee.

Proposed penalties for misbranding or selling substandard seeds include a fine of Rs 5,000 to Rs 25,000. This is too small for a seed producer earning crores of rupees, said an official in the Andhra Pradesh agriculture department.


The bill gives seed inspectors the power to take samples from anyone selling, buying or transporting seeds. The inspector can even search and seize seeds without a warrant. Such unbridled power, many fear, would give rise to a bureaucracy with farmers at the receiving end.

The seed bill also affects Centre-state politics by limiting states’ role in seed regulation—states will have limited membership in the central seed committee, the main regulatory body. “Agriculture is a state subject. How can state governments be deprived of substantial power to take decisions?” asked Reddy.

Another concern is that the bill by allowing import of seeds may turn farmers’ fields into sites for experiments. ngos and farmer groups are asking that imported seeds be first tested and certified and then sold to farmers.