Soybean does not sprout in 40,000 hectares in Maharashtra, state blames farmers 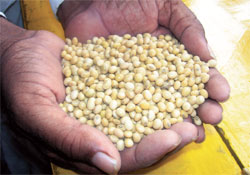 ABOUT 30,000 farmers in Maharashtra are feeling cheated. The soybean seeds they had purchased from the state seed corporation, Mahabeej, failed to germinate this season. Over 40,000 hectares (ha) of farms in seven districts have been affected. Mahabeej has 45 per cent share in the soy seed business in the state.

Government officials and the state agriculture department blame the farmers for the crop failure. M T Gondeswar, agriculture development officer of the worst affected district, Nanded, says the farmers planted the seeds before the soil was sufficiently moist. “This year the monsoons were late and farmers were in a hurry to sow the seeds,” he says. Soybean requires about five centimetres of soil moisture to germinate, and the soil moisture was not sufficient at the time of sowing, he says. Farmer Shivaji Hariba Charke from village Naygaon Wadi in Nanded contests this claim. “Monsoon variations are a yearly phenomenon that farmers are used to dealing with. But seed failure in a single crop on this scale has never been seen before,” he says. Gunwant Patil Hangargekar, farmer leader of the Shetkari Sanghatana in Nanded, says, “If soil moisture is the issue, then all crops should have failed.” Seeds from different agencies sown on the same day as the Mahabeej seeds have shown different germination tendencies, he adds.

Nagorao Bakewad from village Kuntoor in Nanded explains this. “I had purchased 60 kg Mahabeej soybean seeds and 120 kg soybean seeds from an Andhra-based private company, and planted them at the same time. The Andhra seed sprouted while the Mahabeej seed failed. How can this happen if the seed is not bad?” Farmer Bhujanga Maroti Shinde from neighbouring village Godamgaon has a similar story to tell. “I planted 240 kg of Mahabeej seed and cotton almost at the same time. The cotton plants grew, while the soy seeds rotted,” he says. Large-scale seed failure was first noticed in Nanded district in mid July. It was followed by similar crop failure in the neighbouring Parbhani district. Hingoli and Akola are the other badly affected districts.

Another reason for crop failure, according to government agencies, is that the farmers sowed the seeds using tractors, sending the seed too deep into the soil. The agriculture department also accuses farmers of making bogus complaints of seeds failing to germinate in the hope of getting compensation. “In Nanded, we inspected all the 9,334 complaints received, and found that 75 per cent of them were false,” says Gondeswar. Many farmers have made complaints before the mandatory six-day germination period for soybean, he says. “Visits to the farms revealed that seeds had sprouted,” he adds. Many farmers had forged xerox copies of seed-purchase receipts from receipts belonging to other farmers, Gondeswar says.

Farmers are enraged by the accusation of forging bills. “Farmers do not have time to indulge in these acts during the sowing season. It is out of question,” says Hanumanta Dongre of the Shetkari Sanghatana.

A report by the Maharashtra Government Seed Testing Laboratory in Parbhani proves the authorities are wrong. The laboratory tested 1,701 samples of Mahabeej soybean seeds, and found that 715 samples (42 per cent) failed to germinate. “The seed samples were submitted to the laboratory last month by farmers,” says seed testing officer P G Kulkarni. He attributes the crop failure to the monsoons of 2010. The soybean seed is delicate; even the slightest damage to the seed coat destroys germination power. “Last year there were widespread untimely rains during the soy harvest season from October to November in Maharashtra, which could have caused made the seed coats brittle,” Kulkarni explains. He says it is the responsibility of the certification agency to ascertain high-germination potential. “If seeds have, say 80 per cent germination potential at the time of certification, then it is likely to come down to 60 per cent or less by the time of sowing,” Kulkarni explains. Gondeswar replies that low germination potential is common with soybean.

Farmers and seed dealers say stringent checks should be imposed on government officials who certify seeds. Vipin Kasliwal, president of Nanded District Seed Dealers’ Association, says, “The crop failure has caused a lot of tension between the farmers and dealers.” Since there is no quick redressal mechanism, government should investigate the matter thoroughly and monitor the work of seed certification agencies, Kasliwal adds.

Farmers say they are disillusioned with Mahabeej and the state government’s failure to take cognisance of their plight. Charke says, “For every acre (0.4 ha), we have suffered a loss of Rs 1,000 on seeds, plus Rs 700 to Rs 800 on labour for sowing, and about two weeks of the crop season.”

Despite protests, the government is bent on blaming the farmers. Maharashtra Chief Minister Prithviraj Chavan, who had earlier promised the guilty would be punished, recently made a media statement to the effect that the seed failure was caused by untimely sowing.
News News News Soyabean Soyabean Soil Capability Seeds Plant Breeding Nanded (D) Maharashtra Farmers Farmers Agriculture
SUPPORT US