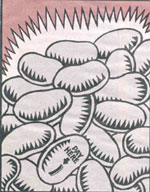 GLOBAL trade and agriculture now embarks on a new phase on January 1, 1995, with the establishment of the World Trade Organisation. However, the prickly question of control over crop seeds of the world seems likely to bedevil international negotiators. The latest uncomfortable reminder was exemplified by 2 separate challenges filed in early December 1994 by an international coalition of public interest groups led by the Ottawa-based Rural Advancement Foundation International (RAFI) and US company Monsanto against a broad European patent granted to the us-based biotechnology firm Agracetus. Agracetus nurtures ambitions of gaining monopoly control over genetically-engineered soyabean seeds and plants.

RAFI's attempt to stop Agracetus hinges on a notice of opposition to the company's patent application at the European Patent Office. Among RAFI's major objections and that of its allies is that the invention is neither novel nor "non-obvious" as the previous reported discoveries. Further, it is alleged to contain insufficient disclosure and covers all forms of genetically-engineered soyabean plants and seeds, regardless of the genes used or the transformation technology employed.

Patrick Mooney, executive director of RAFI sounds a note of warning on the long-term implications of Agracetus' move: "A patent granting a single corporation monopoly control over genetic research on one of the world's most important food crops -- soyabeans -- is a threat to world food security, and demonstrates that the patent system is recklessly out-of-control."

For the Rome-based International Plant Genetic Resources Institute, the danger lies in "species-wide" patents getting a stranglehold on the future development of the species -- a step that could hamper research efforts in other crops, too. "One danger I see," says the institute's director Geoff Hawtin, "is that investments made in genetic engineering by companies and countries through public research will count for nothing when this type of patent is awarded." The effects of such patents are also likely to be felt in the developing countries, he warns, because the new trade settlements demand patents recognition.

Agracetus, a subsidiary of the us multinational speciality chemicals company W R Grace & Co, seems to care little about criticisms. The company's top brass draws a parallel to their recent research with the development of hybrid maize in 1920 and 1930: it helped catalyse transformation of a seed industry supported by public breeding programmes to one supported by large private seed companies. The company's conviction that it is on the right track has prompted it to apply for similar soyabean patents in Canada and the US.

But Agracetus is aware of opposition. One of its earlier cotton patents is being challenged by the US Department of Agriculture. India, too, has announced its intention to revoke the patent (Down To Earth, March 31, 1994). There will be plenty of sword-crossing over forthcoming trade control issues.