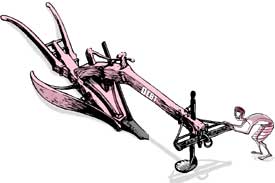 indian farmers are neck-deep in debt. Of the 89.35 million farmer households in the country, 43.42 million (48.6 per cent) are reeling under the yoke, says a recent survey report of the National Sample Survey Organisation (nsso), under the Union ministry of statistics and programme implementation. The report was released on May 3, 2005 and discussed in p arliament the next day. The situation is paradoxical, as the Indian economy has recorded a growth rate of over six per cent during the post-1991 liberalisation era.

The pro-liberalisation lobby considers this phenomenon insignificant as agriculture's contribution to the gross domestic product (gdp) has fallen drastically in recent years and stands at a mere 24 per cent today. So, the economy is largely immune to upheavals in this sector. But what cannot be ignored is the fact that 60 per cent of the country's population thrives on agriculture.

The report implies a link between the debt-trap and farmers' suicides. It says Andhra Pradesh (ap) has the highest percentage of indebted farm households (82 per cent or 4.9 million households) in the country. By December 2003, when the survey was concluded, at least 3,000 ap farmers had committed suicide (see Down To Earth, 'Inevitable Tragedy', Vol 13, No 4, July 15, 2004). Police records shows the numbers to be thrice more. Following ap is Tamil Nadu (74.5 per cent), Punjab (65.4 per cent), Karnataka (61.6 per cent) and Maharastra (54.8 per cent). All these states have also witnessed farmers' suicides in the more recent past. The amount of outstanding loan is very high in Punjab, ap and Karnataka. A study by R M Vidyasagar and K Suman Chandra of National Institute of Rural Development (nird), Hyderabad, also suggests the link between debt and farmers' suicides.

But some other economists disagree. Agriculture economist M S Sriram of Indian Institute of Management (Ahmedabad) argues: "Higher indebtedness in these states can possibly be attributed to a larger requirement of working capital. Why should we see indebtedness as something negative? It is also very much a part of the wealthy states. For instance, Punjab's agriculture is capital intensive and guzzles up a lot of working capital."

What makes the debt-trap more dangerous is the heavy dependence on professional moneylenders, who charge annual interest rates as high as 60 per cent. The nsso survey says they comprise the second most important source of loans for farmers (26 per cent), after banks (36 per cent). Despite their 100-year-old existence and grassroots reach, cooperative institutions are a poor third source (only 19.6 per cent). In case of an agrarian crisis, farmers have little access to institutional credit due to their inability to repay and have the only option of approaching moneylenders, explains the nird study. Repeated crop failure and the inability to repay moneylenders leads them to suicide. In ap, 57 of every 100 indebted households owe money to moneylenders.

Rajiv Kumar, chief economist, Confederation of Indian Industry, points at another malaise: "Indian farmers suffer from a poor credit delivery system. Since they deal with high-risk farming, proper insurance mechanism is essential; only ensuring credit isn't enough." Eminent economist A Vaidyanathan concurs: "In India, credit delivery is driven by supply, not demand, which forces farmers to enter the debt-trap."

Too poor for debt!

An interesting finding of nsso's survey is that many of the country's poorest states have a considerably better debt record: Bihar (33 per cent), Uttar Pradesh (40 per cent), Orissa (48 per cent) and Jharkhand (20.9 per cent). "A majority of the farmers in these states are involved in survival farming and hence have lesser access to credit. This makes them look debt-free," explains Peeyush Bajpayi of New Delhi-based research firm Indicus Analytics.

The same could be the reason for the people belonging to scheduled castes and scheduled tribes having lower debt-burden compared to those from other backward castes and other castes. "The statistics don't indicate the extent of their poverty, which is much more severe. Only because they are not plugged into the credit loop, they are invisible," says Kumar. The size of land is also directly proportional to indebtedness. For indebted farmers owning over 10 hectares (ha) land, the debt load is of Rs 76,232; it lessens gradually to Rs 6,121 for those owning less than 0.01 ha.


"This high indebtedness is due to reduced agricultural investment in the post-reform era," says Kumar. Addressing this concern at the World Social Forum, 2004, development economist Utsa Patnaik pointed out: "Rural development expenditures, which averaged 14.5 per cent of gdp during 1985-90, were reduced to eight per cent of gdp by the early 1990s as part of the deflationary policies advised by the Bretton Woods institutions [World Bank and International Monetary Fund ]. Since 1998, rural development funds have been reduced further, averaging less than six per cent of gdp. In real terms, there has been an average annual reduction of about Rs 30,000 crore in development expenditures during the last five years."

Development economists also say the states that have been successful in agriculture were earlier habituated to free power, cheaper inputs and high yielding variety seeds. But with the investment in agriculture declining, the cost of production went up, shrinking profit margins. For example, in ap the power tariff was increased five times between 1998 and 2003. According to New Delhi-based agriculture economist Rahul Sharma, the cost of production has gone up by 300 per cent since the 1990s. Private marketing of costly 'wonder' (read genetically modified) seeds and other agricultural inputs also lure farmers into the trap of input traders.

Food and trade analyst Devinder Sharma draws serious conclusions from these facts. Because of decreasing domestic support, farmers in developing countries will shift to the seemingly more profitable horticulture and plantation crops, while developed countries will continue growing food grain crops with domestic subsidy arrangements. This will again lead to the phase of "ship-to-mouth" existence for developing countries, which will be forced to buy food grains from developed nations.

Though the nsso survey has not been analysed by economists in detail, the initial conclusions indicate that Indian farmers are one of the biggest causalities of the free economy. The worst is yet to come.