An unusual craving for tomatoes could mean anaemia 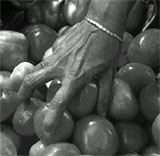 an abnormal craving for a certain food item, or even a nutrient such as clay or starch that may have undesirable health effects, is defined as pica. Patients with food pica typically ingest large amounts of crunchy foods like celery, carrots, peanuts, seeds or crackers. Pica occurs in up to 60 per cent of patients with iron-deficiency anaemia when it typically manifests in the form of a craving for ice, which is called pagophagia.

Now, you can include a craving for tomatoes in the pica category. The take-home message is that a physician should inquire specifically about 'tomatophagia' on coming across a patient with excessive tomato ingestion. Mark Marinella from the Wright State University in Dayton, Ohio, usa , reports that a 66-year-old woman with undiagnosed iron-deficiency anaemia developed a craving for tomatoes. To get more iron, she started consuming more and more of the fruit until she was eating up to about one kg of whole tomatoes every day.

Apart from causing anaemia and ulcers in the gullet, the only noticeable symptoms of the pica was that the woman's palms had turned yellow. Tomatoes contain a lot of betacarotene, too much of which can change skin pigmentation. The woman was admitted to a hospital as she was suffering from fatigue, a common symptom of iron-deficiency anaemia. During the course of taking the woman's medical history and ordering a barrage of laboratory tests, it was discovered that the patient had been eating a lot of tomatoes ( The New England Journal of Medicine , Vol 341, No 1).

The patient was also taking anti-inflammatory drugs for arthritis, drugs associated with stomach ulcers. Tests showed that she had irritation of her stomach and gullet that may have caused her to lose blood, leading to anaemia. Marinella began suspecting that the woman had pica and tomatoes were the specific abnormal craving. As pica is common among patients with iron-deficiency anaemia, the blood iron levels were checked. It was found that iron in the patient's blood was very low.

Marinella diagnosed ulcers in the gullet, which were causing loss of blood and anaemia. She was given treatment to heal the ulcers and given iron supplements to combat anaemia. After several weeks of treatment the anaemia disappeared, the coloration of the woman's hands returned to normal and her appetite for tomatoes also abated.