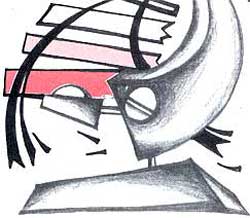 RESEARCHERS at International Business Machines (IBM) claim to have overcome a fundamental obstacle to the improvement of microscopes that work by using visible light. They can now directly examine and study very small fragments of matter such as genes. Developed at the company s Yorktown Heights, New York centre, the new microscope is said to be so sharp-eyed that it is potentially capable of determining spectrums of individual atoms. Says Kumar Wickramasinghe, leader of the IBM research team that developed the microscope, "We hope to obtain the first single-atom spectrums ever recorded before the year end."

Visible light interacts with atoms and molecules to produce characteristic spectrums - patterns that reveal chemical composition. The developers of the modern microscope, as well as its users, have tried hard for more than three centuries to overcome a fundamental limitation imposed by the wivelength of visible light. Researchers using the traditional light-based microscope can examine small objects, as long as they are larger than the wavelength of light used to view them. But when studying very minute particles of matter, the conventional microscope proves to be redundant as the light waves are too long to register ultra-fine details.

Some atomic particles such as electrons have a wavelength which is far shorter than that of light, and in the '30s, this fact was exploited while developing the electron microscope which uses an electron beam to centre images of sub-microscopic particles. Since then, the scanning tunneling microscope - also invented by IBM scientists, the atomic force microscope and other devices which are not light-based have helped study ultrasmall objects, including atoms imaged as bumps on highly polished surface. But these devices do not produce spectrums of atoms and molecules.

Now the Siam microscope can view objects which are one-five hundredth- times smaller than those which can be seen through the conventional microscope. Wickramasinghe believes that biologists can now identify patterns of genes and other molecules at lightening speed, by pinpointing them with light and identifying their spectral patterns that result from interaction with constituent atoms.

The hallmark of the Siam device is that, it can be attached to the conventional light microscope. It uses ordinary lenses to focus laser light to the smallest possible spot on a very thin slice of the sample. Under the sample is a silicon probe, its tip sharpened by etching to a thickness of one nanometre - one billionth of a metre, and about five times the width of one atom.

The probe is mounted on a scanning device that vibrates it towards and away from the 200,000 times a second. sample As the vibration continues, the scatters some of the light which reaches the device after passing through the sample. Another device then combines the scattered light with the unscattered light to produce an interference pattern that provides insights into the chemical composition of the object. This means that biologists will be able to see where antibodies go on the surface of antigens, map genes, or even examine molecular structure of viruses, Wickramasinghe points out.