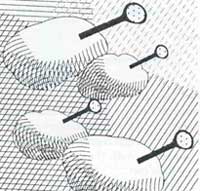 GENETICALLY engineered potatoes that produce their own insecticide may soon hit supermarkets in the us. The special bug killing spud has been produced by incorporating a gene from a bacterium called Bacillus thuringiensis that-produces a pesticide called Bt, into the potato plant.

Incorporating the gene for Bt into a potato plant enables the prant's leaf tissues to produce this toxin. When pests feed on such potato leaves, they also ingest the toxin and die. The potato plants with the Bt gene exterminate beetles, caterpillars, Colorado beetle and other insect pests. Spiders and many beneficial insects are, however, left unharmed (New Scientist, Vol 146, No 1976).

The toxin, reported to be one of the safest insecticides, is harmless to humans. It is unique in that it breaks down quickly and leaves no environmentally harmful residue. Probably this explains why the sales of Bt are booming at over US $100 million a year world-wide.

Monsanto, the chemicals giant that produced the genetically engineered potato, feels that the plant is ready to be grown in farmers' fields. Monsanto's new subsidiary - NatureMark - intends to market this potato variety under the brand-name NewLeaf, which is expected to get us Environmental Piotection Agency's approval soon. Many scientists, however, argue that Bt producing crops may hasten the evolution of beetles that are resistant to the toxin. As the beetles will be constantly exposed to the Bt toxin, unlike conven- tiona spraying of Bt which is done at intervals, natural selection for the most resistant individuals may be much faster with Bt producing crops.