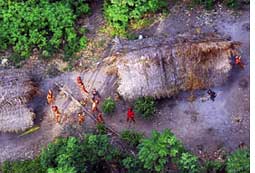 British journalist Peter Beaumont and tribal rights organization, Survival International, have become involved in an unsavoury row over the status of an endangered South American tribe. On June 22, Beaumont, the foreign affairs editor of Observer, reported that Survival had wrongly described a South American tribe as 'undiscovered' when its existence was known for many years. The article sparked a wave of media coverage which describes Survival's photographs of the Brazilian tribe as a 'hoax', a 'stunt', a 'joke' and a 'fake'.

Survival contended it never claimed the tribe was 'undiscovered'. "We only said the tribe was 'uncontacted', which is correct," Survival director Stephen Corry said. But Beaumont has threatened the organization with legal proceedings. "What makes this all the more astonishing is that the wave of reports has seriously undermined the fight for tribal peoples' rights," Corry said.