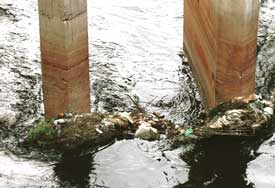 collecting and purifying urine separately is more environment friendly and cost-effective than simply allowing it to flow into the sewer, claims a Dutch study. Conducted by Jan Wilsenach of the Delft University (du) in the Netherlands, the study says the measure would save electricity and chemicals used at sewage treatment facilities.

"If 50 per cent of the urine is separately purified, it would save 25 per cent of the energy needed for the entire purification system," says Wilsenach. Moreover, the stench of the sewer will be lessened, environmental pressure on the surface water will be reduced, and sewer pipes will be better protected against rot, he adds.

The new approach could increase the capacity of wastewater treatment plants by 30 per cent even at around 30-50 per cent urine separation, says Wilsenach, who conducted the study for a phd degree. The findings were published in the Journal of Environmental Engineering (Vol 132, No 3, March 2006).

Another benefit from such a move could be the easy recovery of nutrients (nitrogen and phosphorus) which can be used as fertilisers. Urine constitutes less than one per cent of wastewater but accounts for around 80 per cent of nitrogen and up to 50 per cent of phosphorus present in it. Because municipal wastewater contains these nutrients in a highly diluted form, it is both difficult and expensive for sewage water purification installations to remove them. "In fact, it is illogical to allow such dirty wastewater flow to mix with other wastewater, as has occurred in our sewers for more than hundred years," the university said in a press release.

The study also proposed integrating processes to treat wastewater and source separated urine. To achieve this, the study proposes a "nitritation-denitrification process", where 20-30 per cent of the nitrogen in urine is removed using available organic carbon in urine. The treated urine then is introduced to conventional treatment plant.

According to the study, 40-50 per cent of urine collected and treated separately would improve effluent quality significantly by almost halving the concentration of nitrogen -- from 19 g per cubic metre (m3) to a mere 10 g/m3, in an integrated wastewater treatment system.

With increasing waste loads and demand for improved quality of treated wastewater, there is an urgent need to improve nutrient removal techniques. At present, methanol is commonly used for nitrogen removal. However, the tradeoff between better effluent and methanol consumption is debatable. Methanol use is not only unsustainable in the long term, its cost is also high.

Another approach to removing phosphorus and nitrogen could be through the use of a membrane bioreactor without adding an external carbon source. But such a technique would work out to be too expensive.

Wilsenach's approach may be the best option yet to remove nitrogen. It can also enable phosphorus to be reclaimed as a raw material.

Source separation of urine is gaining interest worldwide to achieve sustainable management of wastewater. The use of urine-separating toilet (see box: Spaced out) is increasing in Scandinavian countries, particularly Sweden. The toilet has been installed in several 'eco-villages' in Sweden. It is proving beneficial in reducing water use and enabling efficient recycling of nutrients for agriculture.