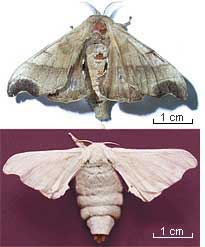 domestication of animals started as early as 9000 BC. But it was not only about taming dogs, sheep and cows. A white caterpillar that loves munching on mulberry leaves was on the list, too. Not more than seven cm in length, it travelled and populated several parts of Asia. The Indus Valley civilization was aware that the caterpillar could spin elegant threads of silk. In ancient China its gift was reserved for the royal family.

The silkworm species Bombyx mori has been domesticated for 8,000 years now. The influence has been so great that it is completely dependant on humans for survival. It cannot fend for itself and it cannot reproduce on its own. It has also lost the ability to fly.

A group of scientists from China, Denmark, and the US studied 11 wild and 29 domesticated types to see how people have shaped the differences.Over the years there has been negligible exchange of genetic material between the two.

In the first ever report of genes related to domestication, the group has reported 159 genes whose expression has been enhanced by artificial selection. Out of these, four are active in the silk gland and are involved in increasing cocoon size and production of superior silk. Thirty-two are active in the midgut to enhance digestion and 54 are specific to the testes, emphasizing their importance in the process of human-induced reproduction. The silkworm has also gained some behavioural characteristics--it can tolerate being handled by humans and their proximity as well as thrive in overcrowded areas.

"This work is unique and important as this study can also be extended for other organisms including domesticated crop plants and animals to identify the events responsible for domestication," said M V Rajam, geneticist from the University of Delhi. He also added that "these studies would aid in improving useful traits of animals and crop plants."

"The findings will help understand how to enhance important traits in other organisms in an environmentally safe manner," wrote Qingyou Xia, author of the article reported in the August 27 issue of Science Express.