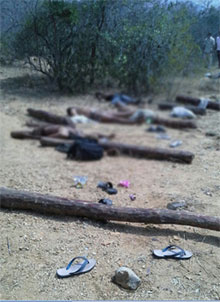 The National Commission for Scheduled Tribes (NCST) has sought a report from the Andhra Pradesh government on the Seshachalam firing incident. On April 7, officials of the state forest department and police’s special task force (STF) fired at alleged red sanders smugglers in the Seshachalam forests of Chittoor district, killing 20 people.

The commission has decided to send a team, led by vice chairperson Ravi Thakur, to the spot. The decision comes in the wake of a petition stating that most of those who were gunned down belonged to tribal communities in Tamil Nadu. One of the witness-survivors of the “encounter” had deposed before the National Human Rights Commission (NHRC) on April 13, saying that all 20 men were migrant workers from Tamil Nadu. NHRC has ordered a judicial probe into the incident.

NCST Chairperson Rameshwar Oraon said in New Delhi that apart from visiting the spot of the police firing, the team would hold discussions with government officials and others to ascertain facts.