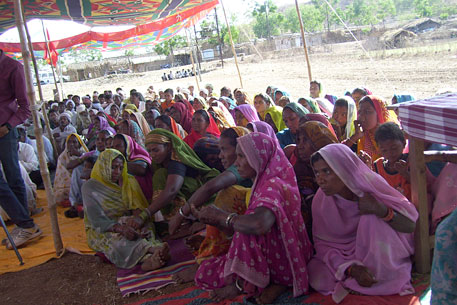 Angry over the paltry rate at which the Irrigation Department is procuring tribal land for an irrigation project, residents of seven villages in Dharni tehsil of Maharashtra’s Melghat region demanded work to be stopped till their demands were met.

At a recent public hearing, organised by the people and non-profit Khoj, residents protested the huge scale of forced relocation of Korku tribals from Melghat.

The Rs140 crore Garga Medium Irrigation project proposes to irrigate 4,298 hectare (ha). It has a submergence area of 420 ha. Fifty-five houses of Tatra village are included in the project’s submergence zone.

The department has not issued land acquisition notices to the people. Instead, it has opted for direct purchase. The Maharashtra government resolution (GR) of 2006 allows such a transaction, provided the land is bought at the prevalent market rate. The GR does not give land owners the right to litigate.

The residents complained that the price offered to them—Rs 1.25 to Rs 1.5 lakh per 0.4 hectare—is not sufficient to buy land and demanded alternate land.

Ravi Patel, an ethnic Korku and resident of Dharni town, said the GR requires authorities to check land transactions of the past five years to decide the price. Despite being provided evidence of land sales at Rs 3 lakh per 0.4 hectare, the department has stuck to a low price.

Gadga village sarpanch Saubai Dhaikar demanded alternate land instead of monetary compensation, failing which a compensation of Rs 10 lakh per 0.4 hectare be given.

Accusing the department of committing irregularities, Sabulal Jawalkar of Tatra village said, “Work on the dam started without taking the gram sabha’s consent. This violates the Panchayat (Extension to Scheduled Areas) or PESA Act”. Violating the Maharashtra government’s rehabilitation guidelines, the compensation and rehabilitation packages were not finalised as per people’s satisfaction. Also, the department did not take the required permission of the collector for acquiring tribal land, Jawalkar said. 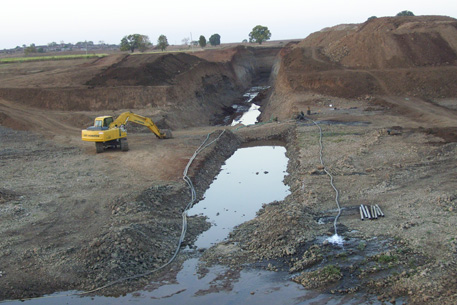 The residents also resented not being given information like the project’s Environmental Impact Assessment (EIA). Neither were they allowed to take part in the survey of land under submergence. “Submergence area of the recently-completed Kawda Nala project in Dharni tehsil has turned out to be much higher than the government estimate,” said Ganga Jawarka of Hattida village. “The same is likely to happen here.”

Arjun Mawaskar of Tatra village said that the department had initially given a written notice saying no house will be submerged. “Now, they say that 55 houses in Tatra will get submerged. Who will be responsible if more houses go under water after the dam is constructed?” he asks.

The Garga project had received technical clearance in 2008, said Yogini Khanolkar of Narmada Bachao Andolan, present at the hearing. However, the rehabilitation plan was not finalised till December 2010. Land acquisition cannot be done merely on the basis of a GR. The department must issue notices under the relevant sections of the Land Acquisition Act, she said.

In their list of demands the residents included, among others, correct submergence estimate through a repeat survey with people’s participation, copies of the EIA and rehabilitation plan, display of all relevant information in village panchayats and land acquisition under relevant sections of the Land Acquisition Act.