It will continue ravage the coastal districts till early morning; scale of devastation will be known by late Sunday morning

Severe cyclonic storm Phailin struck Odisha coast at 9.15 pm at a speed of 210 km per hour. It made landfall at Gopalpur, a town already cut off from the state’s government communication channel. After a delay of about an hour, the India Meteorological Department made the announcement in Delhi. The cyclone is 250 km wide and has been carrying with it moisture sucked from an area half the size of India. It is the second worst cyclone to hit Odisha in 14 years.

By 10.30 pm, there was no information on human casualty. The cyclone will impact six districts directly. In Andhra Pradesh, two districts have been impacted. According to National Disaster Management Authority (NDMA) sources, 11 million people will be affected. The cyclone will continue to unleash severe rains and winds blowing at 200-220 km per hour. “By 7 am at tomorrow morning, a clear picture will emerge. But with all possibilities, there will be major damage to infrastructure,” says a government official managing the control room in Bhubaneswar.

In the past 36 hours, government officials along with the Army and paramilitary forces evacuated close to 700,000 people to safer places in five districts. This is the state’s largest ever evacuation and probably the country’s fastest such exercise. More than 5,000 military and paramilitary personnel are involved in rescue and relief operations.

The three heavily populated towns in the coast – Paradip, Gopalpur and Bhubaneswar – have been without power since Saturday morning. If power is not restored by Sunday, there will be a problem of supplying drinking water. State government is still arranging tankers to supply water.

Some 1,200 villages are expected to be impacted by the six hours of very severe cyclone and preceding rains lasting 12 hours. Army personnel had stationed themselves in some villages, but no reports have been received about damage to life and property. There is complete blackout in these villages.

However, by evening, some 250 villages in the five coastal villages reported flooding.

Now, the big challenge is to embark on the relief operations. This involves reaching ready food and water to some 700,000 people.

The cyclone has led to very severe rainfall, which is expected to continue for the next six hours. The Odisha coast has been without power since noon. The state capital has also cut power supply because of heavy rainfall. Only its secretariat and a hospital have power supply.

Phailin started as a deep depression over the Bay of Bengal, which intensified into what some experts predicted would be a ‘super’ cyclone. It moved towards the Odisha and Andhra coast at the speed of over 200 km per hour.
The predicted severity of cyclone Phailin had Odisha authorities worried because it was heading towards the same coastal districts that were affected by the 1999 super cyclone, including Kendrapada and Jagatsinghpur. 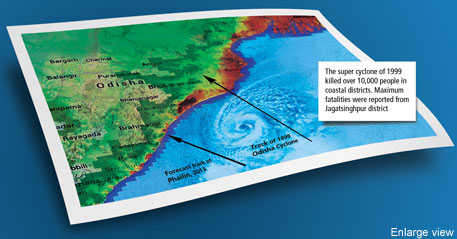 "Cyclone Phailin could be life threatening for Kendrapada, Jagatsinghpur, Ganjam, Puri and Balasore districts. Keeping this in view, the state government has urged seaside villagers to leave for safer places. The authorities are also working with local sarpanchs and other panchayat body members to help people prepare for the cyclone. The government has identified villages that are the most vulnerable and are being moved as part their evacuation plan," Jugul Kishor Mohapatra, chief secretary of Odisha had said at the time.

It was feared the cyclone would be so severe that it could imperil the lives of thousands of people in the coastal districts. “The coastal areas of Kendrapada and Jagatsinghpur are regularly hit by major cyclones and so everyone is taking this threat extremely seriously and making sure the right measures are in place to mitigate the impact and place everyone on alert. Large numbers of seaside villagers are being moved from their villages to safe buildings or cyclone shelters,” S K Mallick, district collector of Jagatsinghpur, had said.

The officials at Paradip Port Trust (PPT) had raised the cyclone signal level to four. Regular coordination meetings were held at all levels of government and humanitarian agencies for preparedness activities, including pre-positioning emergency supplies.

The Odisha government started preparations from Wednesday by stocking large volumes of food grain and medicine at different places and asking the administration to put an alternative communication system in place as a cyclone.
An alert was sounded in 14 districts.

The cyclone started as a deep depression over North Andaman Sea, the Met office at Bhubaneswar had said on Wednesday evening.

Director of Bhubaneswar Met office, S C Sahu, had warned of severe impact: “the atmospheric system is gaining strength from all directions over Bay of Bengal”.

Meanwhile, the state government set up a 24-hour control room to keep a close watch on development and has cancelled Durga Puja vacation of government employees in the 14 districts.

The meeting resolved to release water from all reservoirs, apprehending that heavy rain would occur under the influence of cyclonic storm. Six sluice gates were opened at Hirakud reservoir – the largest reservoir of the state.
National Disaster Response Force, Odisha Disaster Rapid Action Force, Fire Service and Odisha State Disaster Management Authority were also alerted about intensification of the cyclone system. Moreover, rescue boats have been shifted to strategic positions in view of brewing cyclone over Bay of Bengal.

Odisha Chief Minister Navin Patnaik had written to the Centre, requesting it to instruct the armed forces to be on standby to help the state administration in rescue and relief operations. According to sources, experts have informed the state government that the cyclone would be a severe one. The IMD forecast on vulnerabilities indicate that the communication systems in Odisha and Andhra Pradesh coast will be severely damaged. This was a major concern as communication plays a key role in evacuation and relief operations.

Epidemiology of tropical cyclones: The dynamics of disaster, disease, and development