The rising trend of murky days in recent years has failed to spur the Indian Meterological Department into action. Quite clearly, the need of the hour is to embark on a major programme to demystify the fog 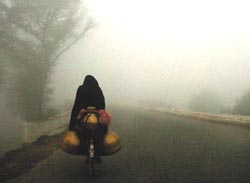 the weather gods seem hell-bent on proving the India Meteorology Department (imd) wrong. Barely had it recovered from the embarrassment of forecasting the monsoon incorrectly when the winter wrong-footed it.

An unusually severe nightly fog, enveloping a vast stretch of the Indo-Gangetic belt from Punjab to Kolkata, has confounded the imd as much as it has disrupted normal life across northern India. Its intensity is such that visibility levels drop to near zero soon after dusk and sunlight is blocked out well into noon.

The fog and an accompanying bitter cold wave - which has so far claimed over 600 lives in north India - are almost unprecedented in magnitude, point out Indian meteorologists. Some of them concede that such foggy conditions have been on the rise in winter months during the past six years.

Such an occurrence over polluted areas can lead to a serious problem as it can trap aerosols - both natural such as mineral dust, and human-made like suspended particulate matter. Aerosols are minute particles in the atmosphere.
Fog is a natural phenomenon and the elements that cause it to occur are quite common: clear, calm nights and high humidity. Under their combined effect, the heat radiated by the ground spreads to the cold sky leading to condensation around minute particles in the atmosphere. This is called radiation fog. In another commonly experienced form of the phenomenon, known as advective fog, a layer of haze is formed by the movement of moist air over a cold surface such as a waterbody or freshly fallen snow. While Delhi and its neighbouring areas are experiencing radiation fog, the advective form is enveloping the Uttar Pradesh and Bihar regions.

For many years, westerly winds (often accompanied by showers) originating from the Mediterranean Sea have been lashing north India in the winter months. A cold wave spawns these westerly disturbances, but it does not last more than a few days. "This time, however, the number of such disturbances was almost one in three days which is unusually high," reveals U S De, former assistant director general of imd. This is one of the reasons for the unrelenting cold wave. But scientists at the National Centre for Medium Range Weather Forecast (ncmrwf), New Delhi, are baffled by the persistent foggy conditions.

While there are many similarities between a cloud and a fog, there are a few differences as well. Firstly, unlike clouds which are formed at higher altitudes, fog condensation takes place a few hundred metres above the ground. Besides, fog droplets are at least 100 times smaller than those that are contained by clouds.

The ideal temperature range in which a fog is formed is 1c to 5c, subject to there being abundant moisture and weak winds. But De says that fog can be dense at higher temperatures also, provided the moisture and wind conditions are conducive.
Is it a case of reading too much into a natural phenomenon? Even scientific opinion seems to be divided on the issue. Some experts wonder whether the occurrence can be attributed to natural inherent variability of the climate alone or there is more to it. "It is difficult to pinpoint the cause - natural unpredictability of climate or changes occurring in it due to anthropogenic activities," avers S M Kulshrestha, former director general of imd. "Hence it is always better to adopt a precautionary stand while formulating policies dealing with extreme climatic conditions," he adds.

While meteorologists are nowhere near a definite explanation, a section opines that a comprehensive study should be undertaken to understand the extraordinary behaviour of weather systems - be it summer, monsoon or winter - this year.

At least on the weather front, the year 2002-2003 has been an exceptionally inclement one for India. To begin with there was the heat wave that killed 600 people in May, then most parts of the country received monsoon rains relatively late. And now, there's the bleak winter that has taken its time coming but is showing no signs of tapering off.

Further, the meteorologically significant pre and post-monsoon cyclones were conspicuous by their absence. The country usually experiences two or three cyclones before and after the southwest monsoon. These storms from the Bay of Bengal and Arabian Sea bring heavy rains in the coastal areas. While there have been several earlier instances of one of the two playing truant, it is rare that cyclones fail before as well as after the monsoon in the same season.This phenomenon, too, has left meteorologists groping for answers. "We are at a loss because nobody in India has properly studied the inter-annual variability of tropical cyclones," says Akhilesh Gupta of ncmrwf.

Rupa Kumar, who heads the hydrometeorology division at the Indian Institute of Tropical Meteorology (iitm), Pune, says scientists in the organisation are planning to scrutinise all these anomalies closely. "We have to quantify the effects to know whether the values are well within the long-term variability figures," he says. Jayesh Srinivasan of the Centre for Ocean and Atmospheric Science at the Indian Institute of Science (iisc), Bangalore, highlights the fact that attempts should be made to trace unusual events or trends, if any. He suspects that little is being done in this field.


"The study of fogs is complicated. It involves aerosol physics, knowledge about turbulence and chemistry," points out Srinivasan.

The imd has been collecting data on fog for several decades, but does not have any active research programme on the subject so far. "It hasn't been a major problem in India till very recen-tly. But we need to study it seriously now," feels Kulshrestha. Barring some isolated efforts at iitm and at the National Physical Laboratory (npl), New Delhi, no major attempt has been made in the country to understand the fog phenomenon. iitm, together with its constituent, the Rain and Cloud Physics Centre, New Delhi, has been analysing the chemical composition of fog that swamped the capital.

According to Suresh Tiwari, in charge of the Rain and Cloud Physics Centre, studies have shown that sulphate concentration in the atmosphere went up 1.5 times during the winter months of 2000-2001 as compared to the corresponding period in 1984-1985. As a result, the ph value of the melted fog came down to 6.69 in 2000-2001 from 7.2 in 1984-1985. This indicates an increasing trend in the concentration of oxides of sulphur (sox) in Delhi.

In a carbon dioxide-filled atmosphere at 20c and normal atmospheric pressure, a ph value of 5.6 is considered neutral. If ph values are above 5.6, they indicate alkalinity. And if they are below this figure, they denote acidic character. This corroborates environmentalists' argument that acid rains are bound to be a potential threat in the not so distant future, unless proper measures are taken to curtail the emission of sox. C K Varshney of the School of Environmental Sciences at Jawaharlal Nehru University, New Delhi, says that the higher concentration of sox in the atmosphere is due to the increase in fossil fuel emissions and in biomass combustion.

Another evidence of growing air pollution is the increase in the number of poor visibility days in cities during the winter. Scientific research carried out over the past three decades in the vicinity of airports has shown that this phenomenon is prevalent even in sma-ller towns of northern India (see graphs: Blurred vision ). In Delhi, the number of poor visibility days had risen from a mere six in the early 1970s to 72 in the late 1990s. In Varanasi, they were up 72 from nine, from 12 days to 80 days in Patna, and in Lucknow and Allahabad the figures for the same period had shot up from nine days to 63 days. As per aviation standards, on a poor visibility day a person with normal eyesight would not be able to distinguish an object at a distance of 2,000 metres.

Scientists at the npl commenced a small study two years ago at the behest of the Central Pollution Control Board (cpcb), New Delhi. The objective was to ascertain whether pollution and increasing incidence of fog have any direct correlation. S C Garg, the npl scientist who leads the Rs 25-lakh research, however, feels that a more comprehensive programme is required to get to the bottom of the pollution-fog link.

It is unfathomable why the rising trend of murky days in recent years has failed to spur the imd into action. Quite clearly, the need of the hour is to embark on a major programme to demystify the fog.