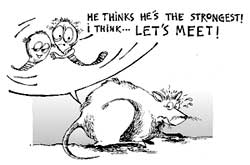 there might be much more in common between sex, parasites and immunity than one thinks, if a recent study is anything to go by.

Evolutionary biologists who have for decades pondered on why sexual reproduction is so prevalent did not have much evidence to help them. Now Andrew Read, Mark Viney and Alan Gemmill of the University of Edinburg, uk, may have some answers after their study on parasite behaviour, reported in a recent issue of the journal Evolution . The team has come up with observations that support one of the most elegant theories of sex -- that it is the result of an arms race between parasites and hosts, but may also play a role in the battle against infectious diseases.

For evolutionary biologists, sex has been a difficult puzzle mainly because it is inefficient as a way of spreading genes: if all else is equal, an asexual female can reproduce her genes twice as fast as a sexual one, because each of her children have all of them instead of half. Most importantly, since sexual reproduction shuffles genes --- mixing those from the father with those from the mother -- it will often break up combinations that work well together. Why then do most organisms seem to have sex, at least from time to time?

A possible explanation is that as parasites have shorter generations than their hosts, they tend to evolve more rapidly. Accordingly, in a population of asexual hosts a parasite will probably manage to evolve a way to evade its hosts' defences relatively quickly. In a sexual population, though, host organisms can keep dodging the parasites' adaptations by rearranging their genes with every generation.

Read and his colleagues turned the question around. If sex is important in allowing hosts to escape from their parasites, they reasoned, it might also be important to parasites trying to attack their hosts. The group looked at a parasite of rats, Strongyloides ratti. Conventionally, S ratti can reproduce either sexually or asexually. The method it chooses depends both on the genes and the environment.

Read and colleagues kept the genes constant by using worms descending from the same asexual female but manipulated the immune system of the rats that the worms infect. Some of the infected rats were temporarily deprived of their immune system using drugs or radiation. Others were permanently deprived of immunity by a lack of the relevant genes. A third group, designed to act as a reference, had healthy immune systems. And a fourth had previously been exposed to the worms and should, therefore, already have had a strong immune response in them.

S ratti when inside the host is always asexual and comes to the outside world through the host's faeces. Its eggs hatch into asexual infective larvae or into sexual adults. The team collected the faeces of rats and allowed the eggs to hatch. They found that worms which infected 'immuno-compromised' rats (groups one and two) produced fewer sexual offspring than those infecting rats with intact immuno systems. And group three worms in turn had fewer sexual offspring than group four.

This shows that as the immune response becomes stronger, the parasites increasingly produce sexual offspring. The results are consistent with studies on Candida albicans (the yeast that causes an infection known as thrush). The parasite is thought to be asexual, for which the evidence comes from samples taken from aids patients. Whereas, samples from healthy individuals have shown the organism to be reproducing sexually.

This is worrying, seeing the growing menace of aids. These immuno-compromised people are susceptible to all sorts of infections. By altering the balance between sexual and asexual reproduction in these diseases, people with failing immune systems could speed up their evolution. The treatment of aids is already resulting in many drug-resistant strains of organisms. If these various strains reproduce sexually when they infect people with intact immune systems, it might result in the combining of their different resistance mechanisms and may spread multiple drug resistance throughout the parasite population. This would render disease much harder to treat in everybody.