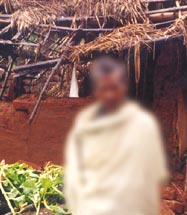 calamities kill and maim. That they also leave the survivors mentally scarred is completely ignored in India. While the authorities believe in providing compensation and bare basic relief, a report reveals that such measures are not enough to provide succour to the victims. Even months after the cyclone struck coastal Orissa in 1999, several people in the Ersama block, which was the worst hit area, were in hysterics from the shock of the disaster. Some were incessantly babbling, while others were breaking into fits of laughter. More than three years after the colossal tragedy, the situation has not changed much.

According to Psychosocial Care of Survivors of Super Cyclone in Orissa, even in 1999 it was evident that the victims required psychological help. The document has been prepared on the basis of a sample study conducted by the Bangalore-based National Institute of Mental Health and Neuro Sciences, and Action Aid India, a New Delhi-based non-governmental organisation that played a major role in post-cyclone reconstruction. The study was done in the three coastal districts that were the worst affected: Puri, Jagatsinghpur and Kendrapara.

It brings to light some alarming facts, which are generally glossed over following a disaster. After a year of the Orissa tragedy, the victims required tremendous support on emotional and social security fronts. Depression was widespread. People were easily irritable and would be ready to physically assault each other over trivial matters. 'Psychological morbidity' was particularly very high among women. Many young widows wanted to get married. In one community, illicit sexual relations were found among 30-40 per cent of the adults and adolescent girls.

Furthermore, around 54 per cent adults regularly complained of headaches, while 44 per cent felt they were not sleeping well. Other symptoms such as nervousness, trouble in thinking clearly and stomach-aches were noticed among 35-45 per cent of the survivors.

Using the Disability Assessment Schedule of the World Health Organization, the researchers assessed psychological disability to be very high among the victims. "Giving psychological help became essential as an increasing number of emotionally hurt victims were all set to disturb the social balance of the area," says Sital Palbabu, an official of Sneha Abhijan -- a programme of Action Aid India that provides psychological support to the victims. Sneha Abhijan is striving hard to improve the situation. "I could not have recovered from the trauma, had I not been provided good counselling," says Jagdish Mali of Ajagarabedi village, who lost many family members in the cyclone. More such programmes would go a long way in providing the healing touch to the numerous victims.