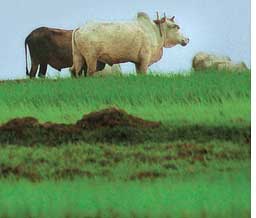 IN THE last 20 years, the rural areas of Australia's Darwin city saw an increase in agricultural practices. Groundwater became the preferred source of irrigation. Fire regimes were improved to prevent damage caused by bush fires. This allowed for an increase in the number of annual grasses; certain new plant species were also introduced to the area. Soils were amended to be more of the clay loam type. The nutrient level of these soils is high.

The same period saw an increase in the spread of a pathogenic bacterium, Burkholderia pseudomallei, in the area. The bacterium causes melioidosis, a severe disease affecting humans and animals in the tropics. Symptoms include fever, joint pain suggestive of osteomyelitis, septicaemia, abdominal infection and chest pain suggestive of pneumonia, amongst others.

Researchers from the Charles Darwin University and Department of Natural Resources, Environment and the Arts, took 809 soil samples from different parts of Darwin. They used molecular methods to find out if the bacterium was present in them. They found that at undisturbed sites, the bacterium was found near streams and in vegetation rich areas but in disturbed soils, its presence was linked to the presence of animals, farming and irrigation. "It shows that the spread of B pseudomallei is connected to changes in land management," wrote the authors in the paper published in the January issue of PLoS Neglected Tropical Diseases.

In residential areas, the soil contained more bacteria in the dry season. The irrigation of gardens and cultivated areas in dry seasons improved the conditions for the survival of the bacterium and the irrigation systems helped by pumping bacteria-carrying groundwater to the surface. A higher bacterial count was also observed in paddocks, pens and kennels holding horses, pigs, chickens or dogs and cats. Once infected, these animals helped in the spread of the microbe via faeces-contaminated soil. Besides, digging or foraging activities of animals also increased soil aeration, allowing for the contamination to spread. Changes in soil caused by construction and soil excavation have been associated with outbreaks of melioidosis in western Australia in dry seasons.

"As the bacterium naturally occurs in the soil in endemic areas, measures to contain the spread are limited," said Mirjam Kaestli, the lead author of the paper. Precautions could include wearing closed footwear when working with soil, cleaning hands with an antiseptic after handling soil. The infections mainly spread by contact with the affected organism or contaminated groundwater that enters the body through puncture wounds, cuts, or abrasions in the skin. Hence, wearing gloves is essential.

To protect livestock, hygiene should be maintained in their resting places and measures to drain the pens could be taken. Application of lime to the soil in the garden at regular intervals increases soil pH which should also reduce the load of B pseudomallei in soil because it can't survive under alkaline conditions. "However, that recommendation is still theoretical and more research needs to be invested into effective control measures," said Kaestli.

The disease has been reported from several states of India including Tamil Nadu, Kerala, Karnataka, Andhra Pradesh, Maharashtra, Orissa, West Bengal, Assam and Tripura. V Balaji from the department of clinical microbiology at Vellore's Christian Medical College said that in the recent years the incidence of the disease has increased manifold in the country. He also attributed it to India being the capital of diabetes; diabetes has been found to reduce the body's resistance to fight diseases, increasing vunerability to melioidosis. Furthermore, a flourishing economy led to an increase in construction work involving soil movement and excavation, added Balaji.