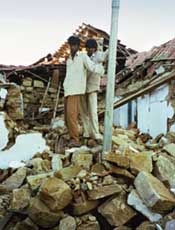 earthquake-resistant measures adopted by India may be founded on shaky ground as the country has failed to incorporate the latest understanding of geophysical processes, caution experts.

Seismologist K N Khattri, who recently retired as head of the seismology department at the Indian Institute of Technology in Roorkee, questions the soundness of the seismic zoning map of India, which is used as the basis for construction codes in seismic areas. Writing in the March 10 issue of Current Science (Vol 90, No 5), Khattri said that the map looked particularly patchy for the Himalayan region, which has experienced several strong earthquakes.

According to the seismic map, last updated in 2002, the Himalayan region has only a "few" islands of high seismicity (categorised as zone v), with the remaining areas categorised as zone iv , the next lower risk range. "While regions close to epicentres of previous large earthquakes in the Himalaya are shown as having the highest risk, the adjacent areas along the range are shown with lesser risk -- it is not consistent with the geological understanding of the processes generating earthquakes," he said.

One such study was conducted in 2004. Led by V C Thakur of the Dehradun-based Wadia Institute of Himalayan Geology, the study asked for a revision of the seismic map, particularly for the Himalayan region. The study, which appeared in the June 10, 2004 issue of Current Science (Vol 86, No 1), stressed that the Himalayan region between the Himalayan Frontal Thrust and the Main Boundary Thrust -- major fault lines running the length of the Himalaya -- should be classified as a zone v region , not as zone iv.

An important parameter for a seismic map is the force with which the ground shakes during an earthquake. This is measured as the peak ground acceleration (pga). As per the country's seismic map, the average pga for zone iv is 2.4 metre per second square (m/s2), and for zone v, its value is 3.6 m/s2. But a study reported in Current Science (Vol 77, No 3, August 10, 1999) by a team of scientists at Hyderabad-based National Geophysical Research Institute, has shown that the entire Himalayan belt has a pga ranging between 3.5 m/s2 and 4.8 m/s2. The figures are significantly higher than what the zones indicate. Unfortunately, the information was not incorporated when the seismic map was updated three years later, says Khattri.

"A matter of grave concern is the use of the current building codes devised on the basis of flawed national seismic zone map, leading to creation of unsafe buildings. Hence, there is an urgency to produce scientifically correct maps, both in the large- and the micro-scale on the basis of which appropriate building codes can be defined," he says. For instance, buildings in zone v have to be 1.5 to 2 times stronger than those in zone iv , says A S Arya, national seismic adviser to the Union government.

Building codes are adopted on the basis of recommendations given by committees in which scientists are members. Therefore, the Indian scientific community itself should be blamed for such a shoddy work, Khattri says.

C P Rajendran, a geologist with the Thiruvananthapuram-based Centre for Earth Science Studies, says the world over seismic maps are updated as and when new knowledge emerges. "In India, we are grappling with maps that are static in nature, whereas most countries have dynamic seismic maps, where it is possible to even measure potential threat to a building for a given ground motion acceleration (or pga)," he adds.

According to R N Iyengar of the Bangalore-based Indian Institute of Science, "Seismic hazard estimation is the weakest link in the efforts to minimise the damage caused by an earthquake. When we underestimate the hazard, we are playing with the safety of millions of people. But when we exaggerate it, it leads to wastage of precious resources." Hence, it is very important for seismic zoning to be done in a foolproof manner. That will have to be an important milestone on the road map for better preparedness.