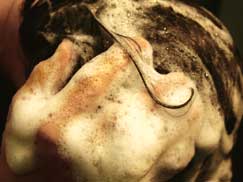 shampoos may make your hair look good but appearances can be deceptive. A compound called diethanolamine (dea), which is used in shampoos to create foam, has been found to interfere with normal brain development of foetuses in pregnant mice, claim researchers at the University of Carolina at Chapel Hill in the us. When dea was applied to the skin of pregnant mice, the foetuses showed inhibited cell growth and increased cell death in the hippocampus -- the area of the brain responsible for memory.

Previous research on dea has focused on its potential as a carcinogen. The present study is the first exploration of the compound's affect on brain development. But the finding needs further study and should not cause undue alarm, says Steven Zeisel, associate dean for research in the School of Public Health. The study appeared in the August issue of the faseb Journal (Vol 20, No 10), brought out by the Federation of American Societies for Experimental Biology.

dea appears to block the body's ability to absorb the nutrient choline, which is needed to "build" a baby. A pregnant woman requires extra choline so that she can pass the nutrient to the foetus. More than 100,000 tonnes of dea are sold in the us each year. It is used not only in shampoos but also in hand soaps, hairsprays and sunscreens.