Shape up or ship out 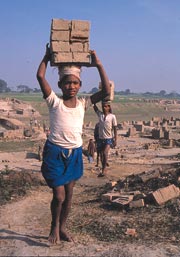 the Central Pollution Control Board (cpcb) has recently directed all state pollution control boards (spcbs) to crack down on brick kilns not adhering to emission norms notified by the Union ministry of environment and forests (mef). Though the brick manufacturing units were given time till June 30, 2002, to comply with the 1996 norms, majority of them continue to flout the prescribed standards. "We have directed all spcbs to close down brick kilns found flouting rules after November 1, 2002," says R N Jindal, senior environmental engineer, cpcb.

In a country, which has close to 0.1 million brick kilns, enforcement of these norms will be a gargantuan task. The authorities are, however, confident of implementing them. "I do not think monitoring will be a problem," says K Sanjeevi, member secretary, Tamil Nadu Pollution Control Board.

The cpcb has advised the brick manufacturing units to shift from the redundant technology of moving bull's trench kilns (btk) to other designs such as fixed chimney btk and vertical shaft kilns, which are less polluting. But R K Verma, spokesperson, All-India Brick and Tile Manufacturers Federation, says that the government is not providing any loans to them. "Many small-scale kilns have not been able to change their chimney design because they do not have money to install new iron or steel chimneys," adds Verma.