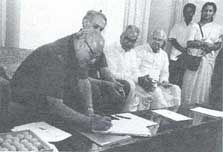 A 25-year-old dispute over sharing of the Yamuna waters has at last been settled with Haryana, Rajasthan, Uttar Pradesh, Himachal Pradesh and Delhi signing an agreement on March 12 -- reached after grappling for hours in the 6th round of talks on the issue, held at the initiative of the union water resources minister, V C Shukla.

The water accord is a feather in the cap for the Delhi state government headed by Madanlal Khurana, as Delhi's share -- used mainly as drinking water -- has more than doubled. The accord even states, "In a year when the availability of water is less than the assessed quantity, Delhi's drinking water requirement would be met first and the balance distributed among the other states in proportion to their allocation." The Yamuna's environmental balance is also sought to be safeguarded by agreeing to maintain a minimum flow of up to 10 cusecs of water throughout the year.