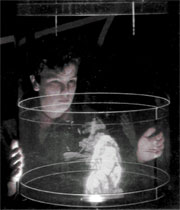 though the word laser conjures up images of Star Wars in most people's minds, it is among the most widely used technologies in our times. From bar code scanners to producing holograms, from fibre optics to cd rom drives, lasers are ubiquitous. A highly monochromatic beam of coherent radiation, laser light does not spread like ordinary light even when it travels great distances. The coherence (all the photons in the light travelling in step) is what distinguishes laser light from ordinary light. Now come reports of a beam of atoms travelling coherently, that is, behaving like photons in a laser. Wolfgang Ketterle and his group at the Massachusetts Institute of Technology, us , have successfully demonstrated coherent behaviour in Bose-Einstein condensates made from sodium atoms (Science, Vol 275, No 5300).

A Bose-Einstein condensate is basically a cloud of atoms that are cooled to a temperature pretty close to absolute zero (-273 c) in a magnetic trap. Since the first condensate was demonstrated using rubidium atoms by E Cornell and his colleagues in 1995, there has been a lot of research into their properties. Due to the laws of quantum mechanics, the atoms in the condensate behave as if they were a single particle rather than a group of particles.

The first step in turning the condensate into lasers was to create an output coupler. This is a device that allows the experimenter to extract the output, whether laser light or atoms, from the place where the laser light is produced. In lasers, it is typically semi-silvered mirrors in the lasing cavity that function as an output coupler. Ketterle and his team reported in the January 27 issue of the Physical Review Letters the successful implementation of a coupler, which allowed them to obtain a narrow beam of sodium atoms from the magnetic trap in which the condensate was created.

Now the same team has reported the interference between a pair of such condensate beams. The two beams are made to interfere with each other and the resulting pattern is observed using absorption imaging. If the two beams are coherent, then one expects a regular pattern of interference fringes, which is exactly what the researchers have observed. This is conclusive proof that the condensate beams were coherent in nature and can be used much like laser light.

Though it is too early to predict the nature of applications for such beams, it is certain that there is a lot of potential. The coherent matter waves will not only have a lower wavelength than light but can also be easily focused to a point. This could prove to be revolutionary for nano-fabrication of circuits. Another potential application could be the use of matter waves as atomic clocks, which would allow a wide range of new measurements.