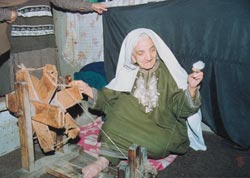 The Jammu and Kashmir High Court recently passed an order directing the state government to effectively enforce the ban on sale and manufacture of shahtoosh shawls. Though the court had prohibited trade in shahtoosh shawls in 2000, the sale and manufacture of the shawls continued clandestinely. Shahtoosh is obtained by shearing the endangered Tibetan antelope (Pantholops hodgsoni) or chiru.

The latest ruling of the court is in response to an appeal made by the Wildlife Protection Society of India (WPSI), a Delhi-based non-governmental organisation (NGO). The WPSI had filed a public interest petition in 1998, but as the order was not enforced, the NGO filed an appeal in the court.

In all other states in India, chiru is listed under schedule I of the Wildlife (Protection) Act of 1972, which prohibits trade in any of its products. But in Jammu and Kashmir it had so far remained under schedule II. Under this, the sale of chiru products is permitted, provided the dealer possesses a licence. In spite of the court banning the sale and manufacture of shahtoosh shawls in 2000, the state has listed chiru under schedule I only recently. The ungulate is also included in Appendix I of the Convention on International Trade in Endangered Species of Wild Fauna and Flora (CITES), to which India is a signatory. Its name figures in the World Conservation Union's (IUCN) red list of endangered animals as well.

It is contended that the order -- if effectively enforced this time around -- may adversely affect the livelihood of thousands of local artisans in the state. Though government officials say that a compensation package has been devised to rehabilitate the workers, the artisans allege that they have been left in the lurch. "The government promised to rehabilitate artisans those who will be rendered jobless by the ban. But to date, this is only on paper," alleges Ghulam Mohidin Rather, general secretary, Garib Mazdoor Pashmina and Shahtoosh Handloom Workers Union. He adds: "Despite repeated letters to the authorities to provide us with an alternative, there has been no response."

Meanwhile, others like Belinda Wright from the WPSI say that the ban will not affect the workers. "The majority of the shahtoosh weavers are involved in the pashmina industry, which is a viable source of income," contends Wright. Pashmina wool is extracted from goats found in the Himalayan and Mongolian islands. But only time will tell if the state will be successful in enforcing the ban and if the workers will find their way in other sectors.