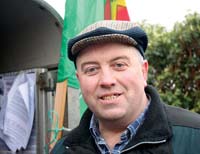 Willie Corduff, an Irish farmer who opposed oil giant Shell's plans to build a gas pipeline on his land, is among this year's recipients of the Goldman Environmental prize.

Awarded annually to six grassroots environmental heroes by the California-based Goldman Foundation, the us $125,000 Goldman Environmental prize is often referred to as the Nobel Prize for the environment. Corduff was among five men jailed for three months in 2005, for attempting to stop Shell from laying a high pressure gas in his home county, Mayo. The protests pressured Shell to change its plan for the Mayo pipeline.

Other winners include Orri Vigfusson of Iceland.Since 1989, Vigfusson's organisation, the North Atlantic Salmon Fund, has raised us $35 million to buy the netting rights from commercial fisherfolk--paying them not to fish salmon in the north Atlantic, and saving an estimated 5 million salmon in the process.

The four other winners of this year's Goldman prize have been feted for taking on some of the most pressing environmental problems of the day including unregulated mining.