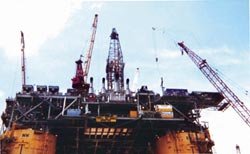 Royal Dutch/Shell has done it again. For the second time in three months, the Anglo-Dutch energy giant has been compelled to downgrade its reserves estimates. The latest revision saw Shell sliver its estimates of "proven" reserves of oil and gas for 2003 by 220 million barrels and by 250 million barrels for 2002. Earlier, in January, it had downgraded one-fifth of its reserves for 2003 amounting to nearly four billion barrels. This cost both the chairperson and vice-chairperson their jobs.

The revision follows the discovery that the Ormen Lange field in Norway did not strictly follow the Securities and Exchange Commission guidance on the definition of "proved areas". The rest of the reserves have been revised in North West Europe and Australasia oilfields.

According to financial analysts, the reserves should have been booked as "probable" reserves rather than "proven". While both have the potential of being commercialised, "proven" reserves would get to the market sooner.

Nonetheless, this incorrect categorisation (whether an error or deliberate) does affect the company's prospects. And that is what law firms like Berger and Montague hope to cash in on. They claim that the company "severely overstated" its market value and are suing it on grounds of "enormous" deception.

There are class-action suits that have been brought against the firm both in the us and by others abroad.