Sheonath deal slammed, no action yet 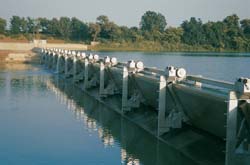 the Chhattisgarh government is dragging its feet on recommendations of the state Public Accounts Committee (pac) in the Sheonath river water supply deal in Chhattisgarh's Rajnandgaon district.

The committee in its report tabled in the state assembly on March 16, asked the government to cancel the deal and initiate criminal action against Radius Water Ltd and the former managing directors of the Madhya Pradesh Audyogik Kendra Vikas Nigam Limited (mpakvn)-- now called the Chhattisgarh Rajya Audyogik Vikas Nigam (cravn). The committee also asked cravn to take possession of all assets associated with the Rs 9-crore project and sought to scrap the build-own-operate-transfer project within one week after the report's submission.

It also said that the state was cheated by giving away the rights over the river's resources to the private company on an annual lease of Re 1. "It is a major criminal conspiracy. Under pressure and allurement, the problems are being deliberately ignored by the government," said pac chairperson Ravindra Chaubey.

pac criticised the then managing director of mpakvn, G S Mishra and chief engineer of Madhya Pradesh State Industrial Development Corporation Limited V N P Shrivastva for manipulation and forgery of documents. The committee said mpakvn had given away natural resource worth crores of rupees.

The government has not yet initiated any action. "We are studying the report and will do everything in public interest," says Chhattisgarh chief minister Raman Singh.
The Sheonath project, India's first experiment with privatisation of rivers, covering a 23-km stretch of the Sheonath river, was widely criticised for its ecological and social damages.

The deal was signed on October 5, 1998, between mpakvn and Radius Water Limited, a private company. Radius was given a concession to build a barrage across Sheonath for supplying up to 30 million litres (mld) of water per day to the Borai industrial estate in Durg district.

According to the agreement and lease deed, the company would supply 40 million litres of water per day at Rs 10 for 1 cubic metre to mpakvn for distributing among industries. According to the take-or-pay clause in the deal, the government was required to stick to the price of water irrespective of any changes in the demand. This caused losses to the state since the demand for water had been lower.

Estimates suggest the corporation lost Rs 1.29 crore between December 2000 and June 2002 due to payment for water that was not drawn. In 2000, when Chhattisgarh was formed, Radius hiked the water price to Rs 12.60 per cubic metre. This met with opposition from the subscribers.
When the barrage was built in January 2001, the company prevented villagers from using the river water for irrigation, grazing and fishing. According to the villagers, the administration also backed the company. They protested and challenged the company's claims.

The protests and the campaigns against the project prompted pac to take up the matter. On January 9, 2003, pac got permission from the speaker for a probe. Even before this, it examined the agreement and inspected the area.

Considering the protests, the then chief minister of Chhattisgarh, Ajit Jogi, decided to cancel the contract in April 2003 (see 'Deal shelved', Down To Earth, May 15, 2003). He directed Chhattisgarh's advocate general, Chhattisgarh State Industrial Development Corporation (csidc) and the departments of water resources, public health engineering and legal affairs to take steps to immediately shelve the deal. The departments are yet to submit their reports.

The villagers still hope the pac report will pave way for a quick action. "We have given them all the facts but the government is not serious about the issue," says Gautam Bandhopadhyay of Nadi Ghati Morcha. Subhash Mahapatra of the Forum for Fact-finding Documentation and Advocacy, an ngo who filed the petition in the high court against privatisation of the river, echoes Bandhopadhyay. "The government has not yet acted upon the recommendations in the pac report," he says.