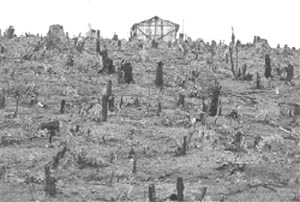 slash-and-burn farming practised by poor farmers in the Indian Northeast, known as jhum , is often said to be damaging to the environment. This traditional mode of agriculture has been discouraged through several measures. A recent study, one of the very few to scientifically assess the impact of jhum on the environment, shows that shifting cultivation may be a far more 'benign' form of human landuse in terms of its effects on bird diversity. This is due to the small-scale and ephemeral nature of jhum . The study goes on to state that selective logging and monocultural cultivation discourage the revival of avian populations because of low diversity of tree species. But the findings also show that increasing pressure on available land, and consequent short jhum cycles have caused the reduction in bird diversity over a long period of time.

The study was conducted by T R Shankar Raman and his colleagues at the Wildlife Institute of India ( wii ). They studied the effects of jhum on the bird communities of the rainforests in the Northeast. A few questions particularly interested the researchers: How different are bird communities of jhum sites as compared to those of undisturbed forest? Importantly, does the avifauna of an abandoned jhum site return to its original species composition and if so, how long does it take?

As it would have been impossible to study the pattern of changes in the habits of bird communities taking place at a single site over a time period of 100 years, the wii researchers resorted to studying different sites that had been abandoned for varying periods of time (starting from one year to 100 years after abandonment). By studying the flora and fauna in such plots, they expected to reconstruct the trajectory of change in the habits of birds over a period of time.

The study also reported that secondary forest (forest growing on fallow land of the jhum plot) is often preferentially used by cultivators over primary forest. This indirectly reduces the negative impact of jhum on the environment, since existing primary forest patches are left undisturbed for long periods of time. The researchers found that after abandonment, in almost 50-75 years, a jhum plot gradually reverts back to its original soil structure (number of soil layers or stratification) and diversity of tree species. Most of the plots covered under the study followed the same pattern of regeneration: starting from fallow fields to rainforest, passing through an intermediate phase dominated by bamboo (5-25 years after abandonment).

Bird communities seemed to closely track these changes in forest vegetation, becoming more and more similar to those of undisturbed forest with the passage of time. Seed-eating birds including the spotted dove ( Streptopelia senagalensis ), the rufous turtle dove ( Streptopelia orientalis ) and the whitebacked munia ( Lonchura striata ) and insectivores such as the grey-backed shrike ( Lanius tephronotus ), which habitually forage in open areas, were most common in jhum plots immediately after abandonment.

During the bamboo-dominated phase of regeneration, tailor birds and slaty-headed scimitar babbler ( Pomatorhinus schisticeps ) were found in these jhum plots. They were followed by fruit eaters such as barbets, hornbills and bulbuls in more mature forest (about 25 years after abandonment), concurrently with the appearance of fig, laurel and nutmeg trees. Due to its greater height, density and variety of trees, mature forest also harboured more species of canopy insectivores such as red-headed trogon ( Harpactes erythrocephalus ) and bark feeders such as the speckled piculet ( Picumnus innominatus ). The jhum site abandoned 100 years ago was found to be almost identical to forest in the types and densities of bird species.

A number of management implications result from the study. It appears that jhum plots require at least 25 years for recovery of original bird diversity and composition even though a fallow period of 5-10 years may be sufficient for retention of agricultural efficiency and productivity.

However, the role of old jhum sites as refuges for bird diversity may be dependent on the presence of large forest in the vicinity of the jhum plots, as these forests help in recolonisation by vegetation as well as forest-dwelling birds after the plots are abandoned. Therefore, substantial amounts of relatively undisturbed forest should be left intact in any area in order to ensure the long-term sustainability of this form of cultivation.

Further, according to the wii data, some bird species, such as the white-cheeked partridge ( Arborophila atrogularis ), hill myna ( Gracula religiosa ) and red-eared bay woodpecker ( Blythipicus pyrrhotis ), do not reach densities that are normally seen in primary forest, even after a hundred years of regeneration. This is a matter of concern as with ever-shortening fallow cycles and the spread of cultivated area at the cost of the forest at the landscape level, such habitat-specialised species may disappear completely from the area.

In India little research has been carried out on the ecological impacts of shifting cultivation, though it is crucial for better conservation planning. Farmers and wildlife managers have always debated on whether jhum is an ecologically sustainable form of agriculture or not. Such studies are bound to make this debate more balanced.