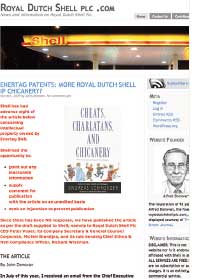 Alfred Donovan became a grandfather decades before the web became ubiquitous. But the 92-year old and his son John, 62, have been a painful thorn in the side of Royal Dutch Shell for more than a decade. The pair run one of the oldest and most effective gripe sites www.royaldutchshellplc.com

The site is so successful that Russain officials and US investigators have used it. Journalists know the site receives juicy leaks from Shell employees and search it for stories. Since setting up his first anti-Shell site in 1995, Donovan estimates he has published 24,000 articles about the company, most of them online.

Now Donovan says he is helping US investigators look into the award of oilfield drilling licences by providing them information leaked to his website.